Last month,  CoderDojo London with the help of Salesforce & Thomson Reuters launched a new and exciting series of Accessibility-themed Dojos, with the first event based around visual impairment. At Dojo, young people learn how to code, develop websites, apps, programs, games and explore technology in an informal and creative environment.

The original concept for this initiative was conceived by John Claffey (CoderDojo London Champion and Thomson Reuters) & Will Coleman (Salesforce) who wanted to explore new ways of making the ‘kids coding’ and ‘maker’ movements more accessible and inclusive.

The launch event was a collaboration between CoderDojo, Thomson Reuters, Salesforce and the Royal National Institute for the Blind (RNIB) and took place at the Salesforce World Tour in London. Supporting us in delivering this inaugural Accessibility Dojo were Technology Partners (BBC Make It Digital and Recite Me) and the event was sponsored by Wind River.

The launch coincided with Global Accessibility Awareness Day (GAAD). The purpose of GAAD is to get people talking, thinking and learning about digital accessibility and users with different disabilities.

The key aims for this initiative were to: 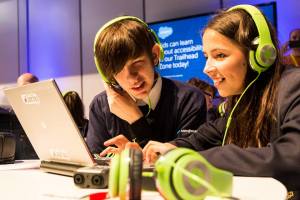 We were absolutely delighted to be joined by 24 coding ninjas from St Vincent’s School (a specialist school for Sensory Impairment),Haberdashers’ Aske’s – Hatcham College, and CoderDojo Youth Mentors.

The Dojo was opened by Robin Spinks from the RNIB who gave an introductory talk on Accessibility. Our coding ninjas then got the chance to work on two exciting projects (developed especially for this Dojo). The puzzles were created by a team of people including Will Coleman, John Claffey, Ben Mustill-Rose (BBC), Su Adams (CoderDojo London), Clive Howard (Blue Canary Films) and ReciteMe.

Pioneers and champions for accessibility

The first Accessibility Dojo proved to be a huge success and the organisers want to extend their sincere thanks to everyone who made this possible.

Our coding ninjas described the experience as “engaging,” “interesting,” and “fun.” They explained how the Dojo taught them about “problems that… were so prevalent in modern society” and “how technology can help those with hearing or visual difficulties.” 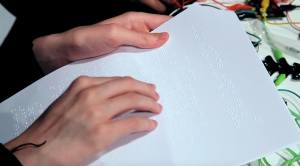 Dr John Patterson (Principal, St Vincent’s School) highlighted why this initiative was so important, noting, “As current statistics indicate, unemployment for the visually impaired (VI) runs at 85%. We need opportunities such as this to showcase VI strengths and clear abilities within this field.”

Johnny Claffey described the participants as “pioneers and champions for accessibility.”

CoderDojo London will be running a series of Accessibility Dojos throughout the summer in 2016. If you are interested in supporting future events, please join their Facebook group.