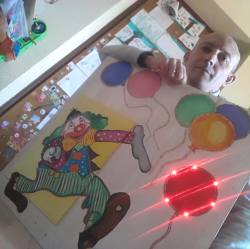 You may already know about the amazing educational possibilities of Minecraft. However, Marco, of Allumiere CoderDojo in Italy, discovered a way to use it to unleash the creativity of ninjas all over the world! How? With a combination of the popular game Minecraft and the social creativity-sharing platform Creatubbles.

Here Marco explains how he coordinated the use of the game and platform by several Dojos in Italy simultaneously:

How it all started

December 1st, 2015, Microsoft EDU Day: I was in Rome to describe teaching using best-selling PC games in schools. It was at this meeting I met with the founders of the child-friendly social network Creatubbles, whose aim is to showcase the creativity of young people all over the world. For several years I had been looking for a way to mix traditional learning activities with new technology, and I quickly realized that this was the missing link. 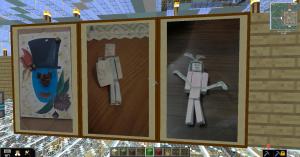 Creatubbles allows children to share creative projects with other kids around the world. In order to do this it has a few rules for the security of children online. Only original creations are allowed, and all images or videos which show any type of images that could reveal the child’s identity are blocked before being published. A child’s account is connected to and overseen by at least one adult. Before being published, all written content first undergoes an automatic check to block any inappropriate language and later awaits direct approval by the adult who oversees the child’s account. All images that are uploaded undergo careful checking, and must be approved by the Creatubbles team before being made publicly visible.

From the physical world to the virtual world

Creatubbles noticed that young people were increasingly taking screenshots of what they had made in Minecraft and uploading them to the platform. The thinking being: “I’ve created a digital construction in my Minecraft world, I like it, I’ve spent a lot of time on it, and I want to share it with other children.” 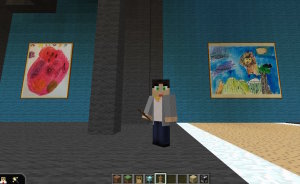 So why not create a Minecraft mod to interface directly with Creatubbles, and save Minecraft builds without having to leave the famous game of pixelated cubes? Why not make it works both ways? This allows children to showcase the physical creations they have uploaded to the platform within the game itself. From the virtual to the physical, and from the physical to the virtual, full circle.

What better way to bring together old practical skills with the possibilities of Minecraft? Our children’s creations in Minecraft were already amazing. Now, they also have the ability to customize them further with objects that they’ve created in the physical world.

As CoderDojo Civitavecchia we started “playing” Minecraft for a whole year, often using it with the Creatubbles mod, until we had an idea: why not try putting our local server in the cloud so other CoderDojo’s could access it too? First, I wrote to some CoderDojo Champions that previously contacted me because interested in our Minecraft activities with the Creatubbles platform and asked them if they were available to join us in a shared CoderDojo session using a virtual environment of Minecraft. My idea was to build a shared gallery, one where our local ninjas could find artwork made by their peers coming from other Dojos, and vice versa. 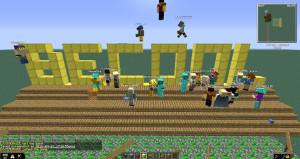 The aim was to show our children that other young people in Italy are all related by virtue of the creativity. They will have a way of sharing with each other the beauty of the places in which they live, by showing, through art, what  their own cities look like. Even living in a tiny village, such as Allumiere, kids can now share their creations and interests with other young people who have their same desire to learn about the world.

We planned a special CoderDojo session to let the children create a “gallery of art and creativity”. Once the event was completely organized I shared this innovative and ambitious project with children from other parts of Italy by talking with interested CoderDojo champions who I knew had already used the Creatubbles platform. 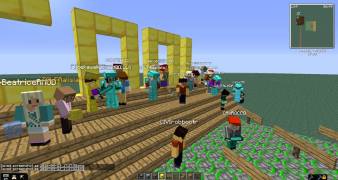 Due to the difficulty to organize and realize numerous CoderDojo sessions running simultaneously, we decided the first event would collaborate with only 5 CoderDojo: Allumiere, Civitavecchia and Fregene from Central Italy and Modena and Maranello from Northern Italy. In practice, we had a Minecraft server that was accessible on the internet for the ninjas. What a perfect example of collaboration and educational exchange between children and young people, who until recently, may not even have known where places such as Maranello, Fregene and Allumiere were! 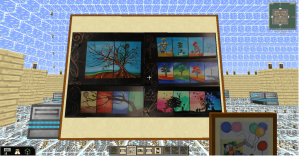 On April 23rd, we first connected our CoderDojos, hundreds of kilometers apart, using a Skype call to introduce one another and to explain the upcoming Minecraft session. In the Minecraft world built by Solary experts and then personalized by me there were several buildings to explore and other waiting to be built.

Ninjas needed to connect to the world using a prefix or postfix to enable mentors to recognize them and know where they were from: so Benedetta and Daniele from Allumiere connected using the username ALLUbenedetta and ALLUdaniele, while Martina, Caterina and Adele from Modena used martinaMOD, caterinaMOD and adeleMOD. 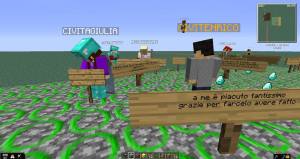 The funniest thing was when we decided to take a virtual photo group with every ninjas and then let them write some thoughts about the session on several Minecraft signs!!!

To better understand the possibilities of this mod, check out this informative video: https://youtu.be/_uK2IzramRI

Thanks to Marco, for his great insight into how Dojos can collaborate through sharing artwork in Minecraft simultaneously. 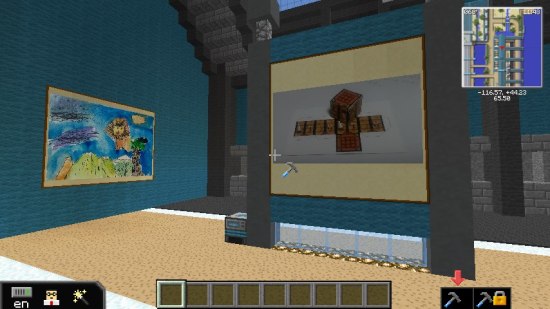 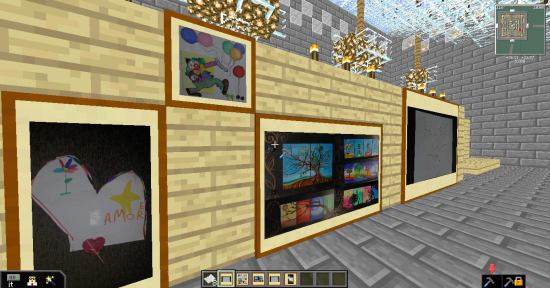 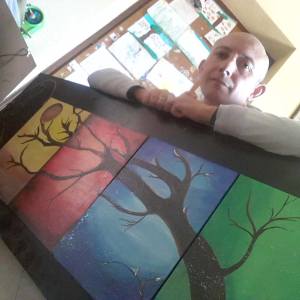