The Duke of York hosts Young Coders at Buckingham Palace! 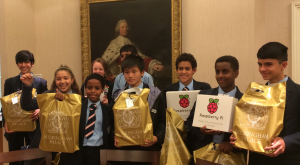 The Duke of York hosted 60 young people from schools in London’s Victoria area at Buckingham Palace today, teaching children the basics of computer coding. The session was supported by CoderDojo. The youngsters had the opportunity to learn the basics of computer programming and created their own games and websites, with guidance from nine young mentors from UK Dojos in Wilmslow, Cheadle, Manchester, Oxford and Shoreditch.

His Royal Highness opened the event by encouraging the young participants to use digital technology to develop their creativity. The G-Tracks team, from Cookstown High School presented their Davagh Nav app , designed as part of The Duke’s iDEA initiative. After the two hour session, CoderDojo’s founder, Bill Liao, revealed every youngster would take home a credit card sized computer, kindly donated to CoderDojo by Raspberry Pi. The Duke challenged the young coders to get creative with their new hardware, and said he would check on their progress in six months’ time. 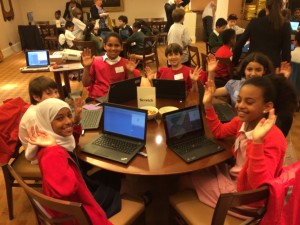 HRH expressed hopes that the Victoria Dojo would continue to operate, with support from the Victoria Business Improvement District (BID), and at premises kindly offered by local companies who joined today’s event. The Duke is keen to ensure that young people have a range of opportunities to develop the digital skills, which will be so important in helping them becoming economically active.  HRH has been involved with a number of organisations and initiatives that support coding, including, Coderdojo, Code Club, and iDEA. 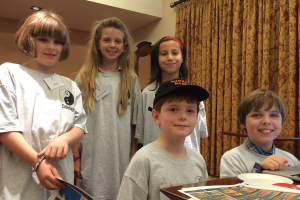 CoderDojo is a not-for-profit organization, which began in a school computer club in Cork, Ireland, and Dojos now take place across the world from London to New York. At a CoderDojo young people between 7 and 17 learn how to code, develop websites, apps, programs and games in coding sessions run by volunteers. 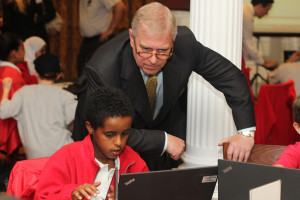 Addressing participants at the coding session, The Duke of York said.

“I’m really pleased that we’ve been able to invite CoderDojo into the Palace as a stepping-stone to getting more business in the local area to think about this. Collaborative learning is really the way the digital world works” 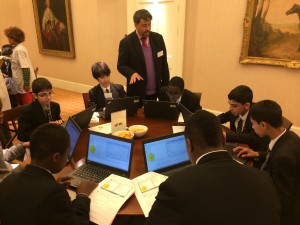 “Acting as a convener of resources and talent to bring CoderDojo to the families in the Victoria area, The Duke of York has shown his commitment to the high tech future of inner city youth. We applaud his continuing efforts and deeply thank him and all the Palace staff who made this landmark event possible which has resulted in the formation of a permanent free and much needed CoderDojo for the kids of the Victoria area.” 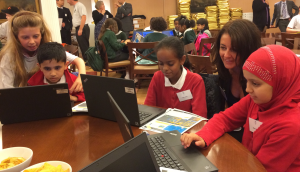 Mary Moloney, the CEO of the CoderDojo Foundation said:

“I’m delighted to have had the opportunity to bring a group of local Victoria based young people to Buckingham Palace for a special CoderDojo session. It’s wonderful to have the support of The Duke of York, in raising the awareness of the availability and importance of CoderDojo to young people. It’s a shared vision that the CoderDojo Foundation has with HRH, to ensure that all young people have the opportunity to develop important technology and interpersonal skills to improve their future careers and also to enable them to have fun coding with other kids all over the world.”

This special CoderDojo was held at the Palace with support from Hays, Barclays, Microsoft and Raspberry Pi. Since the event Microsoft have announced that they will be supporting the future of young coders by starting new Dojos at their offices in the London area. As have Barcleys who have started their Digital Eagles Program. A huge thank you to all involved, those that attended and the CoderDojo Mentors, young and old, that made the Dojo a success!

More phots from the Palace Dojo