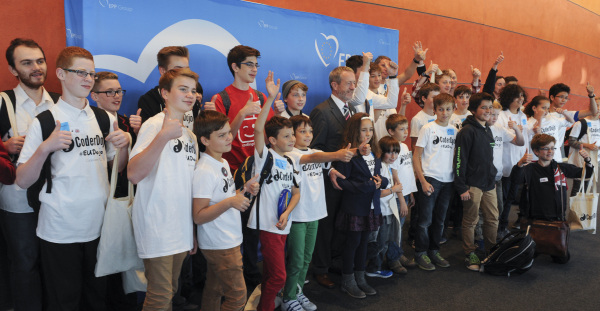 On September 30th, the third annual #EUDojo event hosted by CoderDojo and Seán Kelly MEP took place in the EU Parliament in Brussels. Over 60 CoderDojo Youths,  Mentors, Champions and Parents from across the EU were invited to participate.  The young coders from countries including Ireland, the Netherlands, Romania, Spain, Italy and the UK were welcomed to Brussels to showcase their coding and technology skills and to teach some MEPs how to write a few lines of code. With ages ranging from 7 upwards, the young people amazed participants with their knowledge and ability.

The event was opened by 9 year old Bendetta from CoderDojo Allumiere in Italy who played the Anthem of Europe ‘Ode to Joy’ using an instrument she built herself using code. Other youths that demoed projects, included Zach and Louis from CoderDojo London who built an animated European Union flag using processing, Luca who demonstrated a project he created using both hardware and software, and Frederica who had built a Scratch interactive game.

During the event there was an industry panel of speakers made up of Bill Liao (Co-Founder CoderDojo), Mary Moloney (CEO CoderDojo), Alexa Joyce (Microsoft), Derk Oldenburg (Liberty Global) and Seán Kelly MEP. Alexa who learnt programming using a now redundant language called Basic emphasised how every child should have the opportunity to be exposed to digital skills in a fun, motivational way.

Reflecting on the event Bill Liao said “Democracy is more than just votes. Democratization means access and it was gratifying to have CoderDojo kids from all over Europe given access to the heart of European democracy today just as CoderDojo has given them access to the magic and joy of computer programming.”

Seán Kelly MEP and CoderDojo Ambassador used the event as an opportunity to encourage MEPs in attendance to also become CoderDojo Ambassadors and to get involved by pledging to start at least one Dojo. The Pledge a Dojo campaign which runs from 1st October, aims to get as many individuals from across Europe to pledge to start new CoderDojos in their communities and to give young people in their localities the opportunity to learn to code in a fun safe and social environment.

“Receiving corporate support like that from our partners here today is crucial to help to scale CoderDojo & to reach more kids & young people worldwide. We are grateful for everything that all of our partners, funders & supporters do. As a movement, CoderDojo exists & grows because of the amazing community of kind & generous Champions, mentors & parents,  some of whom are here today to represent the volunteers around the world. Volunteers who attend their Dojos every week in their spare time to encourage & inspire CoderDojo youths. The kids though, how impressive are they, not just as young technologists but as change makers and influencers. They have no problem showing adults how it’s done and astounded the MEPs in attendance. Now we look forward to the support of those MEPs in bringing CoderDojo into their countries and regions around Europe!” – Mary Moloney, Global CEO of the CoderDojo Foundation.

You can see all of the pictures from the event here. 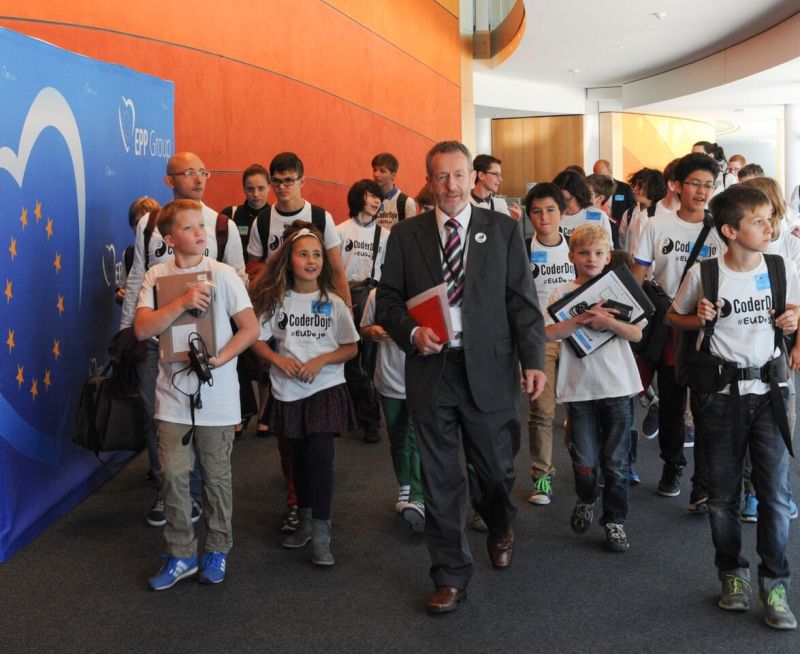 This event has been made possible through the support of Seán Kelly and his team, CoderDojo Foundation, Microsoft, Salesforce, Liberty Global, SAP and Google.