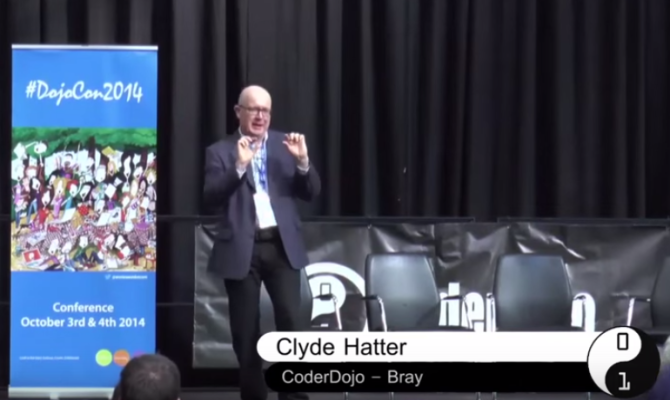 The first Hero in this series is Clyde Hatter from CoderDojo Bray. Clyde came up with the concept for Sushi Cards which are a great resource for all Dojos.  The Foundation team are building on Clyde’s brilliant idea and will be creating Sushi Cards for many different programming languages. They have already released some beginner HTML and JavaScript Sushi Cards.

Below, Clyde tells us about the Sushi Card concept, his experience in CoderDojo and gives some great advice!

Which Dojo are you from?
Bray, Co.Wicklow, Ireland.

When and how did you get involved in CoderDojo?
I read about it in the paper and thought it sounded like a brilliant idea and great fun. Then my kids got interested — and the way to get them a place was to volunteer as a mentor. Liam Friel and the rest of the crew in Bray were very welcoming and understood the merits of holding strategy meetings in the pub in the evening — which was also a plus!

What are Sushi Cards?
A Sushi Card is a two-sided laminated card that helps explain a single programming concept in an visually attractive and engaging way. Used together they can form the basis for a loosely structured, open-ended learning programme.

How did you come up with the Sushi Card concept?
Lots of trying and failing … and discarding the methods that weren’t working.
The cards attempt to yoke together two complementary strands of thinking about information design, namely:
“Writers should group information into small, manageable units.” Robert E Horn.
“Graphical excellence is that which gives to the viewer the greatest number of ideas in the shortest time with the least ink in the smallest space.” Edward Tufte

How do you think Sushi Cards have benefited CoderDojo?
CoderDojo sessions are mixed-age, mixed-ability, mixed-subject and mixed-starting-point. This can be quite hard to facilitate if you’re a mentor. Sushi Cards help to provide a structure — but one which is loose enough to let kids run at their own pace and head off in different directions. Helpful if you’re trying to bottle anarchy.
Also — the cards encourage us to talk more and share ideas about the kind of supporting materials that work in a Dojo.

Describe what CoderDojo means to you in 3 words.
Passing the torch.

What is one of your favourite memories from your Dojo?
A bunch of very motivated and determined girls standing round a whiteboard mind-mapping the structure for their new website. I’d never so much as mentioned the concept of mind-mapping before — they just figured it out for themselves.

How would you encourage someone to set up their own Dojo?
I’d take them down to Bray Dojo and let the kids do the persuading.

What advice would you give to all the young coders out there?
1) Get involved with an open source project.
2) Focus on an idea you’re passionate about — don’t just code for its own sake.
3) Get to grips with version control as soon as you can.
4) When you get completely stuck and feel like screaming — go walk your dog, ride your bike, kick a ball, go to sleep. Come back the next day and you’ll solve your problem straight away. Guaranteed.

If you want to recommend someone from your Dojo for the Hero series, please contact us on: [email protected]