From the Californian Wildfires, how one Dojo rose from the ashes…

From the Californian Wildfires, how a Dojo rose from the ashes…

After a wildfire engulfed the Makerspace she and others had spent two years building, Candace was faced with the challenge of starting anew…

In the fall of 2017, a giant wildfire ripped through Northern California, and large parts of Santa Rosa. No one had seen anything like it. Many of us were at the fairgrounds, helping to ship water, blankets, and supplies to the survivors.

By the end of the week when the last flames had been quenched, we realised our Makerspace was gone. 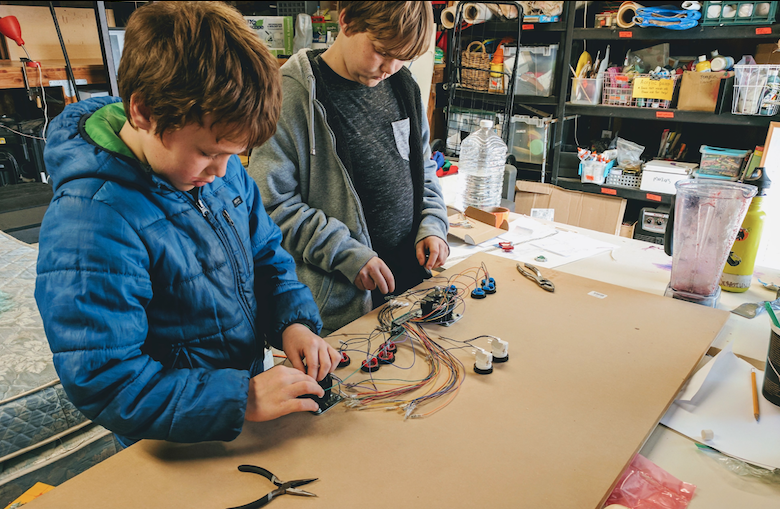 Kids tearfully asked me if it would ever be rebuilt. Many of the kids who attended the Makerspace were also CoderDojo students at the local library, and had lost beloved projects in the fire, including the handmade Raspberry Pi-powered arcade machine.

We took a deep breath. We had lost a lot: tools, materials, and time. The Makerspace represented hours of work, thousands of dollars, and uncountable neurons of love and attention. Our Makerspace wasn’t so much about stuff as it was about freedom.  It had housed tables, supplies, and furniture enough to welcome small people with big ideas. And it was all gone.

But we were Makers, weren’t we? We can Make wherever we are, with whatever we have. It’s not the building; it’s the people in it that make a space creative. Ideas can be big anywhere. If our CoderDojo journey had taught us anything from the beginning, it was that we could build anything starting with just an idea. 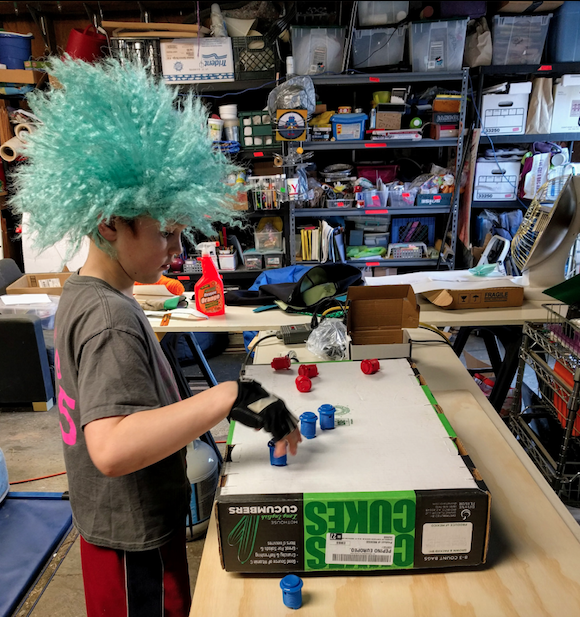 The beginnings of the Petaluma Dojo

It all began because we envisioned a place where kids could nurture their ideas into real  inventions, with all the tools and space they would need. This was where the vision for the Makerspace came from and there was only one thing for it – my colleague and I decided to build one in a detached two-car garage.

Over two years, we literally installed shelving, brought in power tools and art supplies, and put together a small animation studio and mini science lab. But the lab could only fit about twelve Makers at a time. We saw that the Makerspace did have a limit: how many people it could reach. 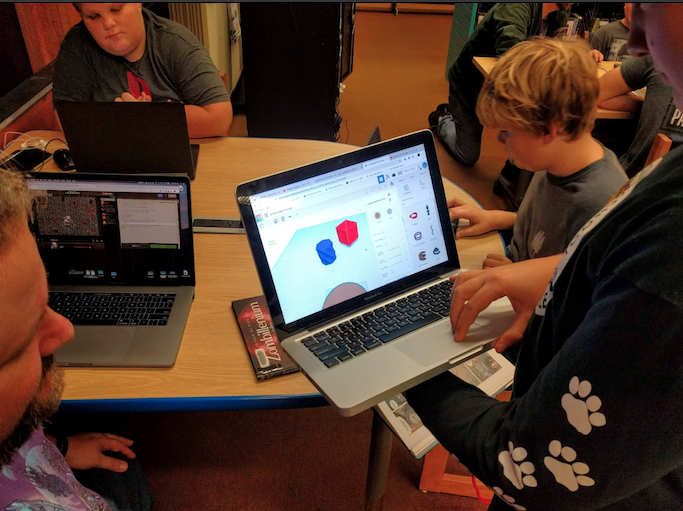 Inspired by the work being done by the 10-12 kids that attended, Barry Stump, John Crowley and I brainstormed a weekly club that would be free, flexible, and focused on digital making. John, who hails from Ireland, suggested we begin to officially run a CoderDojo club.

CoderDojo was the one thing the fire had not destroyed.

The CoderDojo ethos was perfect for us, and within two weeks, I sat across the table from the library staff, explaining our vision for expansion: we wanted five clubs open within five years. They were baffled at first: a computer-based club? But they agreed, and in February of 2015, alongside the continued use of the Makerspace, we hosted our first group of Ninjas at the Petaluma Library. 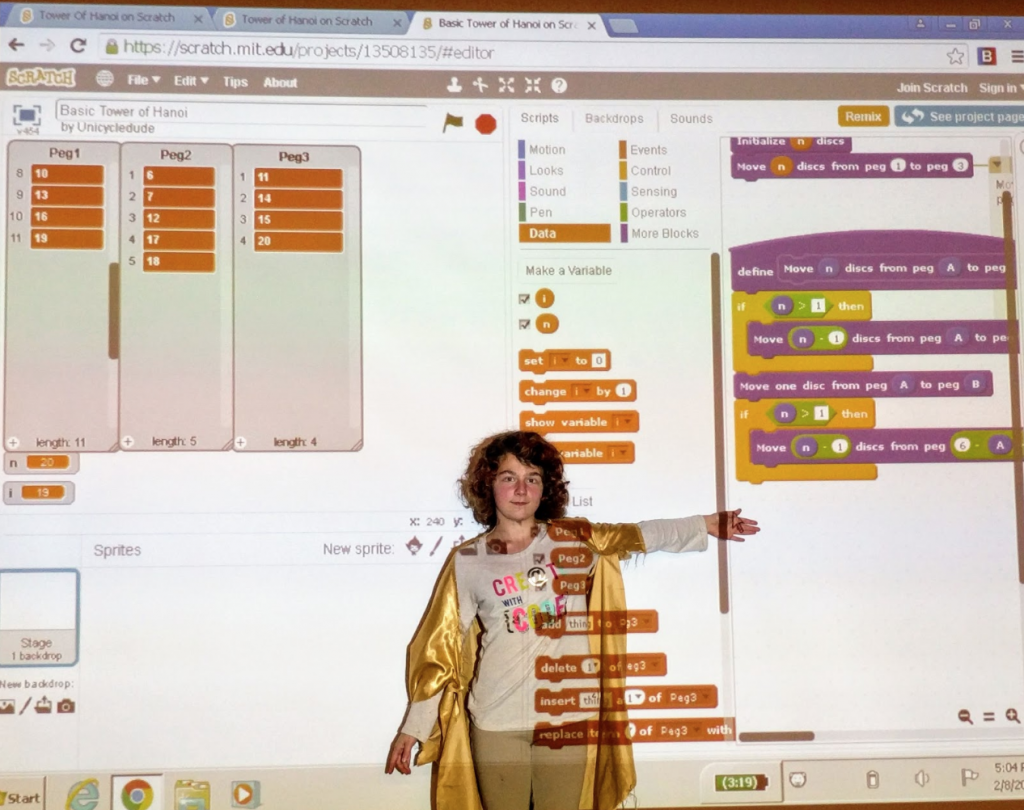 In fact the first eight or nine kids who came to our first CoderDojo were from the STEM and Maker Camps hosted at the Maker Garage – it was where we met, experimented, did camps and classes, etc. alongside our library Dojo.

I emailed their parents: we were starting a free programming club for kids! They came, and later brought friends. We started off simply: printing out Scratch cards and giving demos. We taught loops and recursion with Post-Its. Mentor interests starting popping up: wearables; 3D printing; and Raspberry Pi projects. We brought in our 3D printer, and other mentors quickly followed suit. With all this creative inspiration, imaginations caught fire! 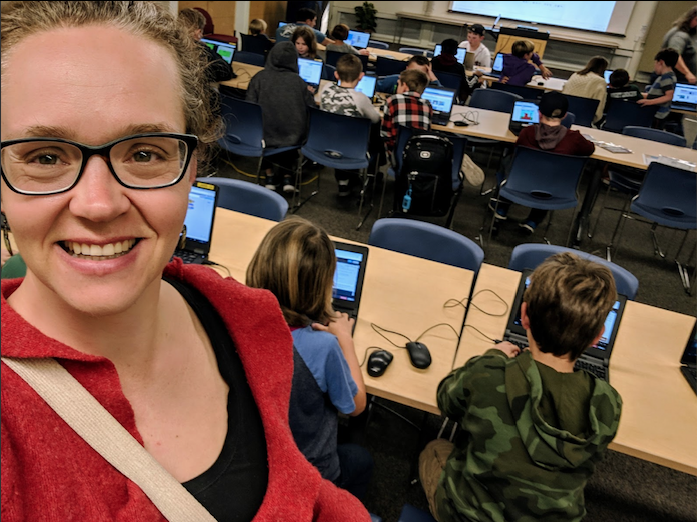 We had grown so much between the Makerspace and CoderDojo group in those three years – after the wildfires had destroyed so much, would we have the strength and energy to be able to grow it again?

We held our regular CoderDojo meeting as soon as the library reopened, knowing that we all needed the sense of empowerment it would bring. It did: even with ash on the ground outside, we were still creating and solving inside.

We decided to focus on the opportunities we had in digital making. Since we had lost our power tools and physical project space, we could now put a lot of energy into code projects (and a few small electronics projects, too.) We could still solder, use Raspberry Pi and other small electronic devices, and do animation. We were surprised at how much we could do. And we were so grateful: CoderDojo was the one thing the fire had not destroyed. All the digital resources were still there. Thankfully, so were all of our Ninjas! All we needed were some computers, and the library provided. 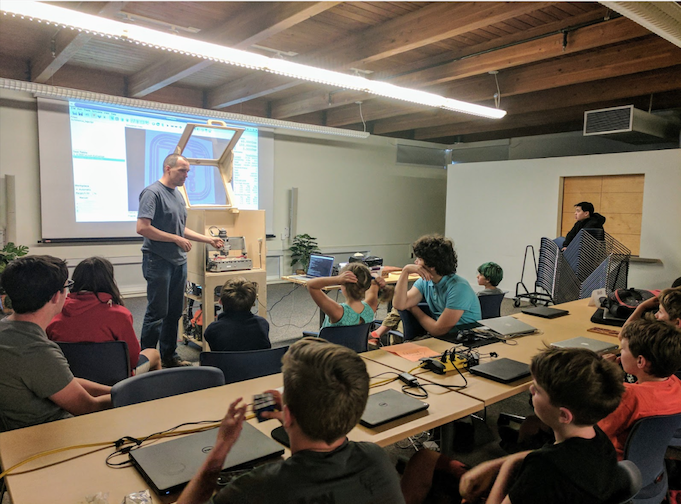 By the spring of 2018, the tremendous energy of our Petaluma program was a key part of Sonoma County’s vision of the 21st century library: an active space that invited student communication and collaboration.

We reached out to other libraries, and they were ready to launch their own clubs, if we would help. We were ready: our mentors were regularly coming up with our own new projects to share, and remixing them. Soon, kids were remixing each other’s projects. (We do a lot of that. You can check it out at our Scratch Studio. We hope you find a project to remix, too!)

In 2018, working with a new mentor team, we launched a second branch at the Rincon Valley Library (north of us). We shared resources, swapped mentors, and invited kids from our flagship program to visit and demo projects to the new group. We let kids show other kids what was possible.

By March of 2019, we expect to have a total of four weekly CoderDojos running at Sonoma County libraries. We had to keep up, creating some infrastructure underneath us: a Slack channel, shared Studios, and a website.

We will have more than five CoderDojo clubs in Sonoma County before the five year mark, but my own benchmark is that our kids are thinking up their own big projects! They are using Javascript libraries to render graphics, creating Asteroids in Scratch, and building websites of their own. This goes to the heart of our mission: making digital technology accessible to anyone, so that the ability to create is available to everyone – come rain, shine or indeed wildfire!

Inspired by Candace’s story? Learn how here with our ‘Start a Dojo’ online course.