We received applications from 13 countries! The projects were judged on their technological & coding complexity, their positive social impact and how innovative they are. Joseph is one of the finalists in the 14-17 year old category who you can read more about below! 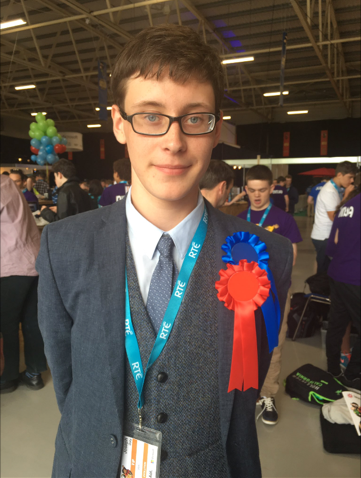 Joseph who is 16, attends his local Dojo in Glasgow, Scotland. Last year he traveled over to Ireland to participate in the CoderDojo Coolest Projects Awards [pictured]. As part of the Future Makers Awards he developed Ballot Addict, a website dedicated to explaining and predicting elections all over the globe. He was motivated by a lack of political engagement among young voters. To make his website he used JavaScript, HTML and CSS to make the features. While Joseph recognised that database technology (using PHP) would help to make it far more efficient at a later date, time constraints led him to saving all of the data that the website requires in JavaScript arrays.

Description: The calculations for elections are adapted to the specific electoral system a country uses, as this often gives a clearer explanation of the overall result of any given election than simple polling numbers. This allows for people from more countries to learn more about their electoral system. Descriptions of political parties, electoral systems, and politics are also available on the site. As the ultimate aim of this site is to aid people’s understanding of politics.

You can register your place for this years Coolest Projects Exhibition 2017. The showcase will be held in Dublin, Ireland on June 17th. The Future Makers Award is just one of several Awards youths can enter at the showcase, which will also feature interactive exhibits, games and insightful speakers.

Youths who want to attend the Coolest Projects Exhibition from across Europe and the US (limited availability) can apply for a travel bursary to attend here (deadline extended until March 19th).