We received applications from 13 countries! The projects were judged on their technological & coding complexity, their positive social impact and how innovative they are. Jeroen is one of the finalists in the 14-17 year old category who you can read more about below! 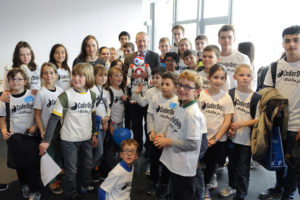 Jeroen is 15 years old and from Belgium. Jeroen attends his local CoderDojo at Mechelen @ Technopolis. He has also participated in our EU Dojo held in the European Parliament where the Future Makers Awards was launched. As part of the his application to the Awards he used HTML, CSS and a JSON database to develop his app. The data is stored via cookies from the user of the app. In order not to lose the information after closing and reopening the app, a web server is used. For the cookies Javascript was used and for the visual effects JQuery.

Description: The app provides a checklist of what the refugees would need to get their life started in a new country, information about the work and culture environment. The App can provide a better life for thousands of refugees by helping them get used to a new country and culture. Through the app refugees can also learn how to get a job in Belgium. In the development of the app Jeroen received support from the Flemish Refugee organization.