2016 was my first year working full-time for CoderDojo and, since I joined the team as the Content Lead in February , I’ve loved working to make the lives of our Mentors and Champions easier by giving them ready-made content to use in their Dojos. I think we’ve got a solid foundation in place as the year draws to a close and I’m really looking forward to building on that in 2017. So, let’s count down my highlights: 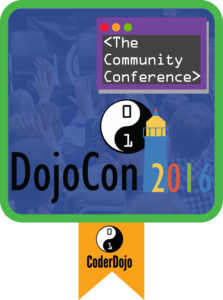 Having been to almost every DojoCon (the annual CoderDojo Community Conference), I’m always amazed at how the crowd gets both bigger and more international each year and it was fantastic to take part this year as a speaker and a Foundation staff member. I love to meet community members and get your input on what we’re working on; I can see some metrics and data on the number of downloads various resources are getting but direct feedback is vastly more useful and I got lots of that, as well as some great ideas for content and new ways of introducing concepts by “hacking” existing programs at DojoCon. I’m looking forward to collaborating with community members on some of those ideas and releasing them to you next year.

We’ve released 8 new series of Sushi Cards this year. Sushi Cards are double-sided laminated cards that communicate programming concepts. They are a really useful resources to use in your Dojo. 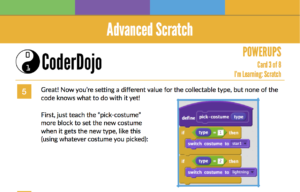 Next year we’re going to put out even more of them and I’m hoping we’ll see more expert/industry partnerships and community collaborations in there too. Right now, the targets include:

There’s still a few spare slots for new Sushi Cards throughout the year, so let me know if you have any more requests! 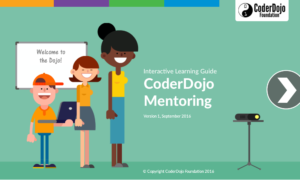 This year we released the first CoderDojo e-learning modules for Mentors: one on the CoderDojo ethos and the other on being a CoderDojo Mentor. If you haven’t taken them yet, see how to access them here and give them a shot.

Next year, I’m going to produce our first e-learning module for Ninjas, but I’m still deciding what it’s going to be about. Right now, I’m thinking it might be on using code the right way to do good in the world, but let me know if you’ve got other ideas!

We made a few tweaks and changes to Kata this year (Kata is where all Dojo and organiser resources are shared with and by the community). We’ve introduced wiki templates and content paths for the first time. I’ve heard that these have made things easier to find, but I also understand that there’s a lot more to do here and we’re planning two waves of serious improvements to the resources section of the site next year. These will include: 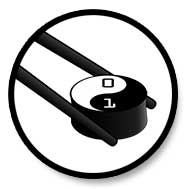 I was really pleased that we released Chopsticks this year, along with some guidelines on content creation for Dojos. Chopsticks is the beta version of a concept for easy-to-use tools that will make producing cool looking content (like Sushi Cards) much easier. Right now, it requires a reasonable amount of familiarity with Node, GitHub and a couple of other things to get it up and running, but early next year I hope to release a version that will run in the browser, without the need to install it, and offer a more familiar user interface, making it accessible to everyone in the community.

So, there’s the cool stuff I got to do this year and an idea of what I’ll be doing for you next year. Feedback, as ever, is welcome in the comments, on the forums, by email, twitter or carrier pigeon!

Here’s hoping you and yours have a great holiday season, and I’ll see you in the new year!