Shane won a Future Makers Award for his flood warning system. You too could be a Future Maker! Read his advice to other youths thinking of applying for the Awards below.

Hi my name is Shane I am 11 years old. I started CoderDojo Athenry  in 2013. I was always interested in computers so when one of my older brothers told me that CoderDojo was starting and what it was about I was hooked.

In 2015/16 I advanced to Raspberry Pi and I really enjoyed it. When Declan my mentor came in with his Raspberry pi one day we were talking about what it could be used for he mentioned it can be used in water .This gave me an idea for my project because unfortunately my family and I had been flooded twice before in 2009/15. I remembered on those nights it all happened so fast and without warning. So I thought wouldn’t it be good if there was something that would give us an early warning  and plenty of time to fill sandbags!!!! Also figuring that a lot of people would not be home at the time it happens and at work how would they could be alerted  that’s when email or tweet comes in to the project.

I am inspired by one day hopefully been able to invent something that will better somebodies life . CoderDojo Athenry has given me that opportunity and I am so grateful to all the mentors in CoderDojo Athenry for there time and enthusiasm.

How I made my Project

I used Raspberry Pi it’s the main power behind the project. Also using the ultra sonic distance censor , 20×4 character Display and  a float switch . All these are attachments  to the Raspberry pi. I used the code C++. I chose these because I wanted to keep it simple as a lot  of stuff wouldn’t be practical in the outdoors.

Advice for becoming A Future Maker!

I received my Future Makers Award in the RDS Dublin on the 18 of June 2016. I had a blast that day. Meeting, talking and discussing ideas with other children and adults. My advice to anyone thinking of entering don’t think of it as a competition, do it because you enjoy it. Don’t always think biggest is best. The simpler the design let’s people understand more of what you are at and trying to achieve. What you think might be small and unimportant can develop into something big in the future.

Take full advantage of those wonderful mentors in your CoderDojo that’s what they are there for and if they are anything like my mentors, no idea is too small or silly.

Do you have a Project that helps others? 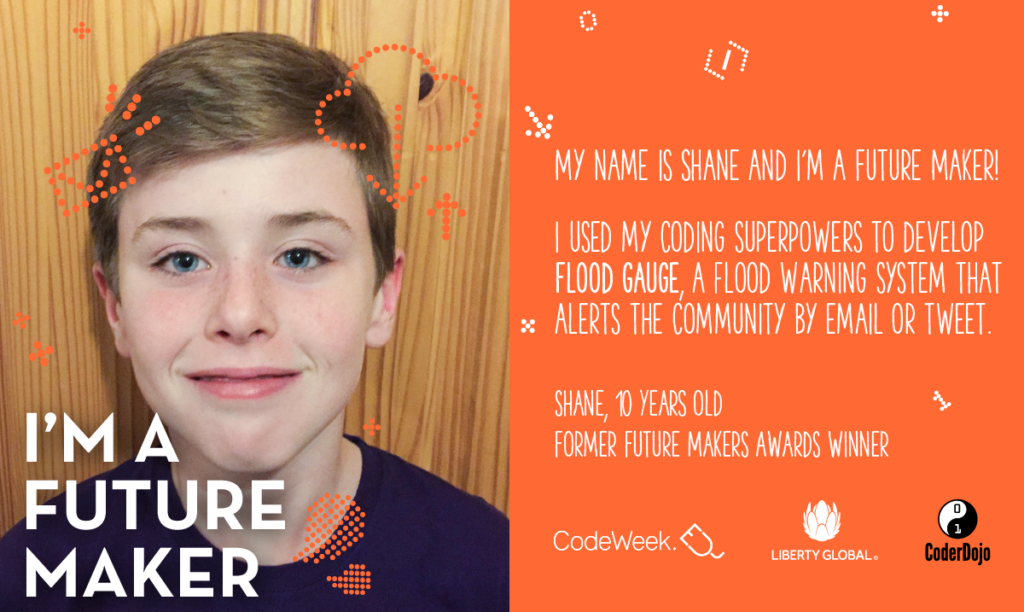 Get information about the Awards in all 10 languages here and our Brainstorming Guide here.