Among the requests I get for new content covering various different languages, tools and topics, there are always people asking for a more structured approach to what to cover with Ninjas at their Dojo. The idea of a fixed curriculum, or anything that strays too close to it, always felt to me like it ran contrary to the learner-led and project based model of CoderDojo.

With that tension in mind, and with the usual caveats of take it, leave it, hack bits off or bolt them on until it fits your Dojo, we’ve come up with a new concept for CoderDojo Content that we’ll start rolling out early next year: the Bento Box (because we have a theme). They’ll look a little something like this: 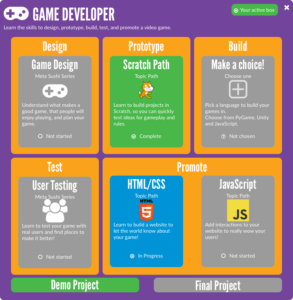 A rough example of a Game Developer Bento Box

What is the Bento Box?

The Bento Box idea is goal based: The Ninja chooses an objective, for example becoming a video game developer,  and the Bento Box lays out the skills they will need to do that along with the Sushi Cards, Paths, and other resources they can use to learn those skills. The box culminates in a major challenge for the Ninja (for example building a sophisticated, well designed, multi-level video game), that should take many Dojos to complete. They will mostly provide structure around existing content, while helping to drive content sourcing and creation to fill in gaps where a needed piece of content doesn’t yet exist.

Recently Riot Games choose The CoderDojo Foundation as one of four charitable organisations to be involved in their new CSR initiative, the ‘Impact Challenge’. With the support we receive from this exciting initiative we will be working on several new projects such as The Bento Box!

How can you give your input?

Bento Boxes are intended to be a built-in feature of the resources section of the CoderDojo website by the end of 2017 and will start appearing in a prototype form on Kata long before that. Where I’m hoping you can help me is in deciding what to build the first few Bento Boxes about, by giving your suggestions on our poll.

Give your Bento Box Suggestions!

(Remember you need to be logged in to Forums to view and vote in the poll.)