On October 18th, the fourth annual #EUDojo event was held in the in the EU Parliament in Brussels. CoderDojo, who were recently awarded a European Citizen’s Prize, hosted the event along with Seán Kelly MEP.  Eighty Volunteers, youths and parents from across Europe were invited to participate in the event. The young coders travelled from Belgium, Bulgaria, Italy, Ireland, the Netherlands, and Romania to the EU Parliament to showcase their coding and technology skills and taught MEPs how to write their first lines of code!

MEP @evapaunova celebrating the young #coding talent in the room at the @CoderDojo #EUDojo pic.twitter.com/5DjxgMiYWV

“We were delighted to co-host EU Dojo again this year, the flagship CoderDojo event for Europe Code Week, with our partners Microsoft and Liberty Global. Europe remains the strongest region for CoderDojo growth, with 800+ Dojos running in the region alone. By showcasing youths digital making and creative skills we hope that CoderDojos vision will spread further across Europe, giving more young people the opportunity to code, create and learn about technology!” -Giustina Mizzoni, Executive Director, CoderDojo Foundation. 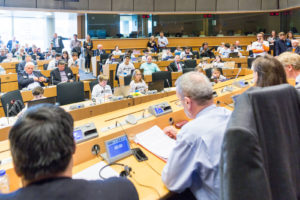 The event took place during Europe Code Week which runs this year from the 15th – 23rd of October. During the coding session, the young coders taught MEPs how to create a basic HTML website and showed other hardware and Scratch projects they had created in their local Dojos.

CoderDojo Co-founder Bill Liao initiated the event with a moving speech about the importance of code for improving our capacity for social equality and developing a solutions from everything from health to agriculture. 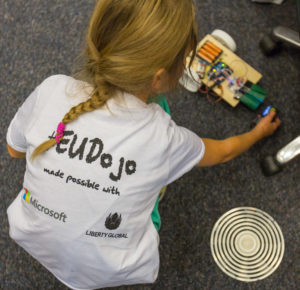 CoderDojo ninjas Aoibheann and Padraig opened the coding session by presenting their award winning farm safety website for children. Lize from Belgium showed off her moving Arduino project which used light sensors to avoid obstacles. While Dhruv talked us through the features of the dinosaur website he built using HTML and CSS.

Sara-Jane Dunn, a Microsoft Research Scientist presented the long-term possibilities STEM and computer science education offer. Youths were inspired to learn about her research into making cells programmable; and the potential they had to fundamentally transform medicine, agriculture and energy generation by learning coding skills.

Derk Oldenburg on behalf of Liberty Global and CoderDojo launched the exciting Future Makers Awards. He explained how he himself had a disability that technology had helped him with; his hearing aid! He encouraged youths to use their coding skills to help improve other people’s lives with similar projects!

CoderDojo and Liberty Global are inviting Europe Code Week participants to GET INVOLVED in the Future Makers Awards. Our aim is to give young people across Europe the opportunity to participate in a pan-European competition with like-minded youngsters to shape the future and create a positive impact in society! 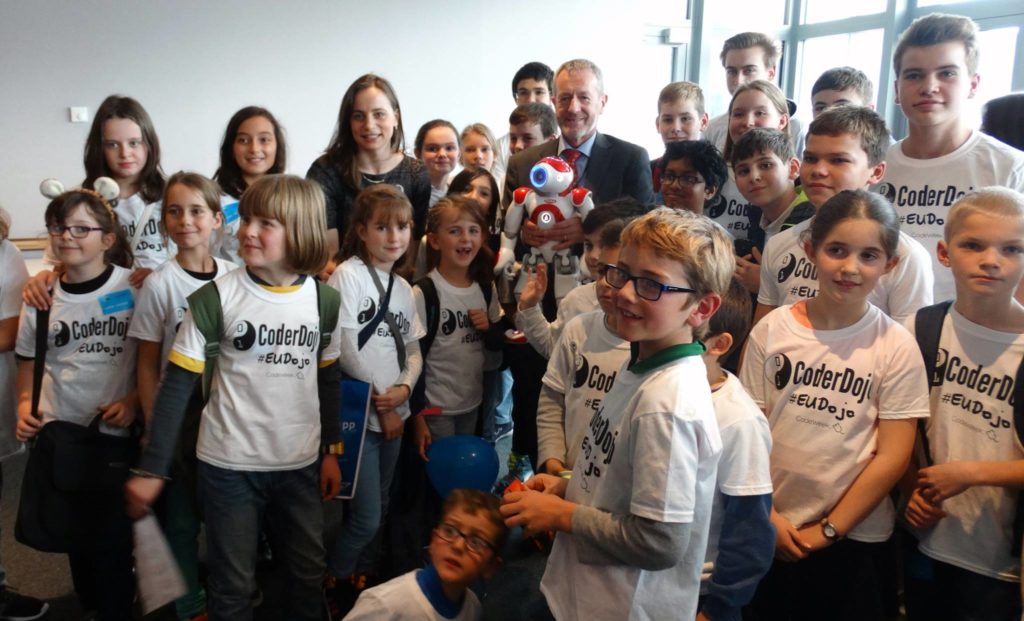 This years EUDojo event was hosted by Sean Kelly and supported by Microsoft and Liberty Global. Thanks to all those who volunteered their time to ensure the event was so successful and fun for all involved! 🙂

For more photos from the day see our Flickr album here!