Luka, a 15 year old Dojo attendee from Cork, has been part of CoderDojo for the last 5 years. Here he tells us about joining CoderDojo, his favourite projects and advice for other coders starting out:

Back in 2011, my dad was off visiting his parents in England, and my mother was looking after me and my two brothers. One day she came upstairs and told us she heard out about this place called CoderDojo at NSC, and asked if we were interested. My brothers said yes. So, we printed out a map (Yes, we printed one out) and took a good hour long drive to CoderDojo zero. 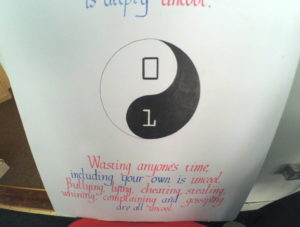 At the beginning, I wasn’t planning on attending it, as I was only around 9 years old, but for the first week I had to, as my dad was away, and my mother couldn’t leave me home alone. On the first week I attended, there really wasn’t many people, less than 10. Once my dad came back home, and my brothers went there a couple weeks, I started to go there every now and then. At that stage, there were more people, and as a homeschooled child, social interaction wasn’t my strong suit. After a while of going, I made some good friends, some of my first friends too, for that matter. My brothers really made it easier for me to make friends. As I felt it was easy to talk to friends they had already made. Although my brothers may not have liked their youngest brother talking to their friends.

After a while, the classes really helped me make a lot of new friends, as they gave me something to do when I couldn’t talk to anyone. I still talk to these friends 5 years later. But back then, I didn’t know much about coding, or computers, so it was rather alien to me. After a good few lessons about HTML, I slowly moved in to the deep end. I learned  Java, and C#, perhaps faster than I should. My brothers were ahead of me, and I was a child who wanted to do what they did. But one thing I found that helped me and others, was mentoring HTML to other beginners, I told them what I knew, and I learnt while doing so. 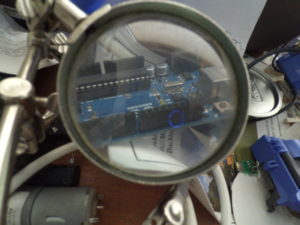 About 1 year later, Bill Liao’s son, Liam and I started work on a website called ‘match the moggies’, that was… an interesting site to say the least. It was about matching cat pictures. After that, we worked on another project; a robot from an old toy that Liam and Bill’s other son, Riley once owned. I was the guy who helped make it, Liam coded it. It was a funny little thing. We programmed it using an Arduino board, and we stopped at the point when it sort of, danced, I suppose you could say that, as it had a pre-programmed pattern it followed.

After a while of the usual CoderDojo business, one night an idea came to me to make a game. Being a 3D artist, thanks to CoderDojo, and knowing friends from CoderDojo who could fill other roles I decided to mention it at the next Dojo. I proposed the idea to a friend named Alan (he’s a great programmer, and knows many languages), and another friend called Oran (he’s amazing at producing music, and also I tasked him with being a story writer) They both liked the idea, and then our little team formed. That was almost 2 years ago now. The team is still growing stronger and better. We are still working on the same game, and have ramped up the team to 5 people in total. Also, we are making two games now. 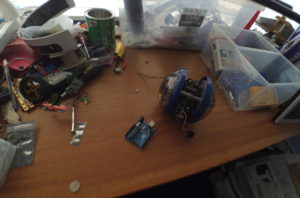 “the best thing is, to this day, I’m still learning“

And the best thing is, to this day, I’m still learning, I’m still helping people, and people are still helping me. But that’s all thanks to the mentors back when I first started out, they helped me, and were friendly. If you’re just starting out, a few tips would be to make sure you allow people to help you, and don’t hide from the mentors. Oh, and learning with friends is great, as you can help each other.

It didn’t just teach me how to code, it made me think differently, and it made me understand so much about computers. Because of CoderDojo, I’m now a 3D artist, and interested in so many other technological subjects, such as video production, and coding (obviously).