Cian, a 15 year old Dojo attendee from Louth, has been part of CoderDojo for the last 5 years. Here he tells us about his first Dojo, his favourite projects and advice for other coders starting out:

That’s when my journey to a career in programming began. It was a Saturday, my Dad told me that a guy he knew had set up some “computer club” in Drogheda and he asked if I wanted to try it out. Not having a single clue what I would do at a computer club, coupled with the fact that he told me there was going to be loads of teenagers there (I had just turned 11 at the time, and I was very shy), I replied, with a very simple “Nah”. I remember thinking about it for a few minutes and then suddenly, something made me change my mind.

Arriving at the Dojo 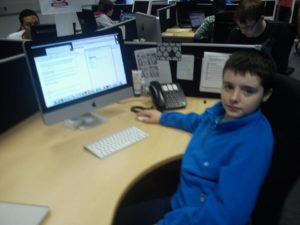 We arrived at CoderDojo. It was being held in a software company’s small office in Drogheda, “MOR Solutions”. It was just five other lads and me. I sat down at a Mac (I was a major, major Apple fan at the time), and whatever happened, I began to script in HTML. And I fell in love with programming in an instant. Within a short while I had a very basic website with a custom blue background courtesy of some very basic CSS. The website consisted of a picture of the planet Jupiter, and described Jupiter and its 4 main moons. There was a gif, pulled from Wikipedia, of all of Jupiter’s moons orbiting the planet.

I remember walking out of the office that day and thinking to myself “This is what I want to do”, it felt as though I had found my hidden talent, something I never knew I was capable of. Word quickly spread of the existence of CoderDojo Drogheda and two weeks later, I found myself back at CoderDojo, in the same tiny office, with about 50 people.

“I fell in love with programming in an instant”

When I look back at that first day, I always see it as a sort of crossroads in my life, if I hadn’t of agreed to go that day, would I be where I am now? It’s amazing how a basic decision like that can change the course of a person’s life in an instant. Since then I have seen CoderDojo grow up into the massive global non-profit it is today, and without it, I don’t know where I’d be. When I was younger, I knew that someone had to make all the stuff I saw on the screen and used everyday, but I thought that was a boring job that was left up to some ultra smart “mad scientists”, I didn’t even know an average person could learn how to code. I know differently now, and trust me, it’s probably one of the most exciting career opportunities in existence.

“When I was younger, I didn’t even know an average person could learn how to code”

In the years that followed, I built up my knowledge of programming, doing mainly web based scripting and Scratch in 2012, and in 2013, programming my very first C program, which basically calculated the amount of time a turkey had to be cooked in an oven. After that I moved onto app development and in late 2013, along with my friend Cormac Kinsella, founded MK Software. From then onwards, over the course of nearly a year, work on our very first commercially available app “Open Share” begun. 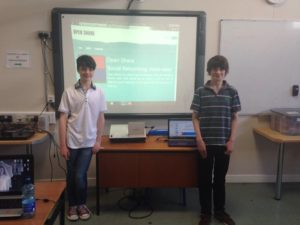 The concept behind the app was simple, a user would type a post into a textbox, then be given a list of all the Social Networks they were members of, and then would select the networks they wanted to share the post on and tap share. This essentially allowed you to tweet and post to Facebook at the same time, which we believed, was a really helpful tool for businesses. You could also send the same message to multiple people across multiple Messaging Services at the same time, or the same person, if you really wanted to spam them, or maybe just really wanted them to reply to a message. 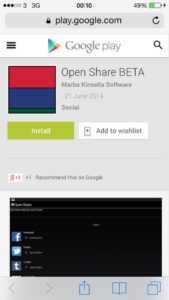 Open Share evolved and was redesigned several times throughout the development cycle. It had originally started off as an idea, a full year earlier in 2012, called “Drag n Drop”. The idea behind this was slightly different. The user would post to a Social Network, and then “Drag and Drop” the post onto another social network, and then that post would then be instantly shared on that network. When work began in 2013, several alpha iterations of Drag n Drop were tested but it eventually proved to be (at least at the time) too difficult to continue and unconventional from an end user perspective. We were using Adobe Phonegap, an app development framework that allowed us to script and program the app in standard HTML, CSS, and JavaScript. While this sped up the development process immensely (me and Cormac had only just begun using native languages at the time and we were mostly experienced in web development), it limited what capabilities of Android OS we were aloud to implement into the app, and dragging and dropping in web based languages on a smartphone touchscreen, at least in 2013, was a nearly impossible task. We weren’t aware of any plugins we could use and writing our own seemed like a daunting task.

It was this that eventually led to the birth of Open Share. The app went through at least 400 internal alpha and beta tests before it’s final Android release on June 22nd 2014. When we released it was huge for us, articles were published in several newspapers and online publications, including Silicon Republic, and we even got a slot on the local Radio station, LMFM. This was a pretty big deal for 13 year olds, we had actually created something, and the fact that we could even see it on the Google Play Store amazed us.

In November of that year, 3 years after my first day at CoderDojo, we went to the Web Summit in Dublin for CoderDojo, we got a big poster advertising Open Share made for us and we basically sat on beanbags beside the CoderDojo booth with our laptops and created a makeshift stand.

Open Share was never really commercially successful, part due to the fact that we did very little after the immediate announcement to advertise the app and mainly due to the fact that Open Share was a mess. It was slow, (because we didn’t use native languages such as Java) and the UI was terrible. But in my view, that’s what makes it amazing. It doesn’t matter that it’s slow, it looks bad or just doesn’t make any sense, it’s the fact that you made something, that’s what counts, and honestly, it’s the best feeling ever.

“To anyone thinking about an idea or programming, just go for it, start small, but think big, even if it’s the most stupidest idea ever just go for it, anythings possible.” 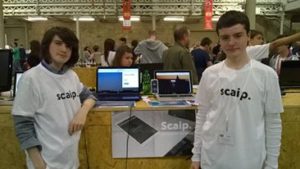 Cormac and I worked on a social network called “Scaip” (meaning Share in Irish) from early to Mid-2015 for the CoderDojo Coolest Projects awards. It was focussed around user security. After the NSA revelations we began to feel as though the internet was becoming a place where people were afraid to say certain things or openly talk about things without being watched and it was becoming a place of paranoia and insecurity, so we tried to create a Social Network that was very secure and allowed it’s users to feel safe. It was really cool (bragging warning). Cormac programmed the backend and I did the frontend and it looked awesome. Unfortunately we didn’t win, but neither did a guy who created an entire game engine from scratch among hundreds of other really cool projects. But still, I still think it was really cool.

“We didn’t win, but I still think it was really cool.”

Then in July, things changed, Cormac and I had a disagreement and it then led to the closure of MK Software. We went our separate ways and founded two individual companies, with me founding “Novanian Systems” (derived from Nova, which means New in latin) and Cormac founding “Trinitcore Co. Ltd.”. From August to November 2015 I released several apps on the iOS App Store, my favourite being SplitNet, which allows a user to use two Social Networks at the same time. SplitNet was a kind of spiritual successor to Open Share for me, continuing on that idea from 2012 of making Social Networking more connected.

Cormac and I eventually made up and put our differences aside, ironically meeting each other in person for the first time in 6 months at the Web Summit in November 2015.

So what am I doing these days?

Well I got a summer job at MOR Solutions, the same company that held the first CoderDojo Drogheda way back in 2011 and that really showed me what’s to be expected of a programmer in the industry. In July I founded Andromeda Game Studios and I’m currently in the process of making a video game with a friend, which unfortunately I’m unable to talk about (watch this space) and I have recently stopped using the name Novanian Systems to publish my work and I now publish my work under my own name. Since 2011 I have been building up my knowledge and I am now experienced in Objective C, Swift, C, PHP, Javascript, HTML and CSS.

My hobbies include reading, watching TV shows, listening to music and procrastinating about school work. I also run for Drogheda and District Athletics Club.

So, now you know how I got here, and there’s something I want to say, for everyone out there reading this, no matter who you are, whether you’re thinking about learning how to code, just can’t think of any ideas or are simply going through a really difficult time with a project, all I can say is, from experience:

“NEVER GIVE UP. No matter how much you want to, DON’T. Trust me, it’s all worth it in the end!”