On August 27th, the dutch regional body (CoderDojo Nederland) organised an unplugged dojo in the open air for 96 kids. It was a great day with nice weather and lots of happy faces. Just the way we like it at CoderDojo! 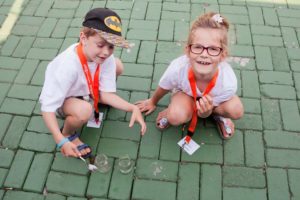 Ever since we got involved with CoderDojo some three years ago, Tiemen and I have always been looking for collaborative opportunities. We figured the more we could work together with other parties, the more reach we will have and the more we can spread the CoderDojo name and phenomenon.

The past year we have been working hard on getting our regional body set up for The Netherlands. This experience of collaboration is something we took with us to the regional body as well. We are still, even on national level, convinced it is one of the key things to help grow the community and CoderDojo brand. 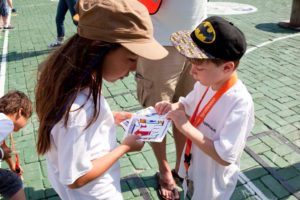 The unplugged dojo is great example of collaboration. In January I moved from Rotterdam to Leiden and became the champion in Leiden. This dojo was a lot smaller than Rotterdam so I had my work cut out for me and started to look for collaborations in Leiden. This summer Leiden destroyed a couple of buildings in the city center to start a project to completely renew the area around the central station. A few people saw this as a great opportunity to ask to turn this open space into a temporary summer hotspot with an event space, theater, shops, food stands and even a beach! It was subsidised by the municipality and they would open it up to all kinds of organisations to collaborate.

This was exactly what we needed! At first I saw it as an opportunity to simply do a local dojo over there instead of the library, but after meeting them and seeing how big it was I quickly changed my mind and set it up to be a national event. Because of the lack of power and wifi, but the abundance of sunshine and space we thought it’d be great to change things up even more. 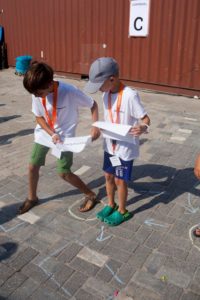 Even though parents are already very glad that CoderDojo is able to put their kids in a social environment, outside of their own bedrooms, they still sometimes look for ways to actually get them away from the computer. Sometimes this works great when working with hardware like MakeyMakey, or Arduino’s, but most of the time even this will still be indoors. By setting up an Unplugged Dojo we could get kids to be more socially involved with each other and be in the outdoors at the same time. I had seen a few pictures from other dojo’s, and heard about csunplugged.org before, but never really did anything with it. This was the perfect opportunity! 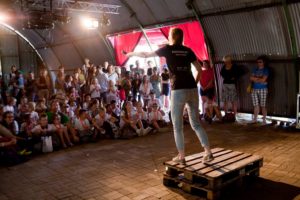 What we did was stick a little bit to magical computer numbers, admit it, we all like to (we were definitely not the first to have mega dojo with 1024 kids in February!). There would be room for 96 kids. The beauty of this number is that is divides very nicely, in groups of 4. Next we would have 6 games, with 4 groups at each game at the same time. You see what is happening here? Kids in groups of 4, times 4 makes groups of 16 per game, times 6 games makes 96 kids! To make it even prettier, games could then divide kids in 2 groups of 8 again, well, you catch the drift.

Every game would have a “Game Master”. Consider it a small version of a champion. The Game Master would be responsible for preparing and guiding the game. They had full control and freedom to purchase material and how they wanted to run their game.

The games we played were:

All games would last 50 minutes, which consisted of 10 minutes explanation and 30 minutes of playtime. The next 10 minutes would be used to have the groups switch games. When we created the groups we also gave all groups a specific order of games. Even numbered groups would switch clockwise and uneven numbered groups would go anti-clockwise. This way kids could remain with known kids, but still be switched up a little at the same time. 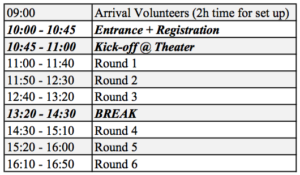 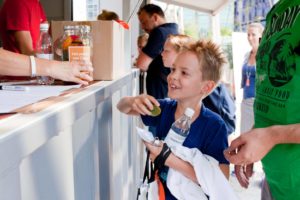 A dojo of this size would not be complete without swag! At this moment we are in a very lucky position since we have had a very (very, very, VERY) generous donation from Elastic and we have Ziggo (the Dutch daughter of Liberty Global) as an ambassador.

This meant we could really go crazy for once, which we were happy to do. We had t-shirts, water bottles, bracelets, pens, keycords, etc. We even had a batch of poncho’s printed in case of bad weather, but didn’t need them (and were sent back due to a printing error anyway). All in all this event has cost our NL foundation roughly €1300. To give you a rough estimation:

As with any dojo there are always things which can be improved. Also with this event we had a couple of insights which we would like to share with you.

Check In – Registering 96 kids in 45 minutes is quite a challenge. However, if you have 4 people to do this it should be fine (you need to check in ~2 kids per minute). In this case, almost everybody showed up late. Which meant by the time we were supposed to start we only had about 30% of kids in.

No Shows – When estimating the amount of swag we needed I presumed 96 kids. Eventually we were not fully booked (only 71 tickets registered). On the day, we had an astonishing amount of no-shows, 17. We have never seen this in any dojo before. On a 30 kids dojo that would be 6 no-shows.

Timing – Even though the time schedule was thought out really well and gave clear guides for kids, mentors and parents, in practice the games turned out to not fill 30 minutes. Mostly games would finish after 15 – 20 minutes and kids would get bored. This caused us to shorten the program, which caused a few parents to be annoyed because they were counting on being kid-free until 5 pm (which really is the least of my personal worry to be honest, we ain’t no kinder garden!). You might want to make sure you test the games out and time them beforehand.

Hot Weather – This is actually something which went really good and I wanted to point out. The weather forecast was 30°C and clear blue sky. We ordered about 200 bottles of 500ml water to hand out to the kids to keep them hydrated. In the afternoon we also went out to buy icicles to hand out to cool them down.

Groups and Schedule – Another challenge was to put all the kids in groups and adhere to whishes of being in groups with friends or family. I created an excel sheet with 24 groups and the game orders per group, before filling it in. This greatly helped in keeping things structured. The day before I used this to print badges with the names, group numbers, game order and parents phone number. 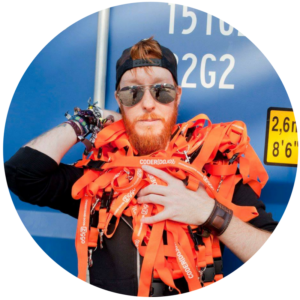 Chris, is a web developer, with a background in design. He is the chairman for CoderDojo Nederland. In this role he is responsible for driving and supporting the work of the Dutch CoderDojo community. He has been the Champion of Rotterdam Dojo for the last three years and CoderDojo Leiden Champion for the last 7 months.

To see more images from the unplugged event see their Facebook album here.