On Saturday 18th the Toscana DojoCon took place in Pisa and was a great success, being the first meeting among all the Dojos in the Italian region of Tuscany. The Pisa CoderDojo together with the media agency yStudium, the University and the local municipality, organised an entire day dedicated to coding, with talks, workshops and a Dojo session in the afternoon.

During the morning activities, set in the historical frame of the Boileau Palace – within five minutes walking from the world famous Leaning Tower –  130 people coming from the different Dojos and from the primary schools of Tuscany met speakers from the world of academia, associations and local businesses. After the opening keynote, concluded by the enthusiast greetings from Mary Moloney, some other exceptional and supercool speakers volunteered their time to join the event and lots of topics were discussed about the importance of teaching to the future generations how to code, involving the entire community throughout this process.

Many tracks were followed by our guests: Computational thinking as a way to improve socio-relational and linguistic skills, Computer Science as a basic subject in our era, the introduction of IoT and boards (such as UDOO) in the Dojo activities, the crucial role that the adoption of cooperative-mobile learning techniques may help ninjas to learn, the Italian Olympic Games of Informatics as an example of healthy competition for kids.

After lunch, the energy, enthusiasm and passion of all our mentors were then palpable during the workshops about Arduino, AppInventor, Scratch, Go! offline coding and other amazing things that each Dojo organised during the first part of the afternoon. Particularly, the project of translating the python language into Italian to ease the transition from Scratch to a high-level programming language was proposed to the regional community as a shared project (https://github.com/PisaCoderDojo/cpython-ita).

Starting at 16.30 in Cavalieri Square, all the mentors started a huge Dojo session with more than 50 kids from all over the region, that played and learned together as it always happens in our clubs. The groups, working at their own incredible projects, coded right in front of the Scuola Normale Superiore one of the three officially sanctioned special-statute public universities in Italy, being part of the process of Superior Graduate School in Italy, in the heart of the medieval centre of Pisa. And everything was fun and special also among mentors that had never worked together before but immediately got on perfectly. 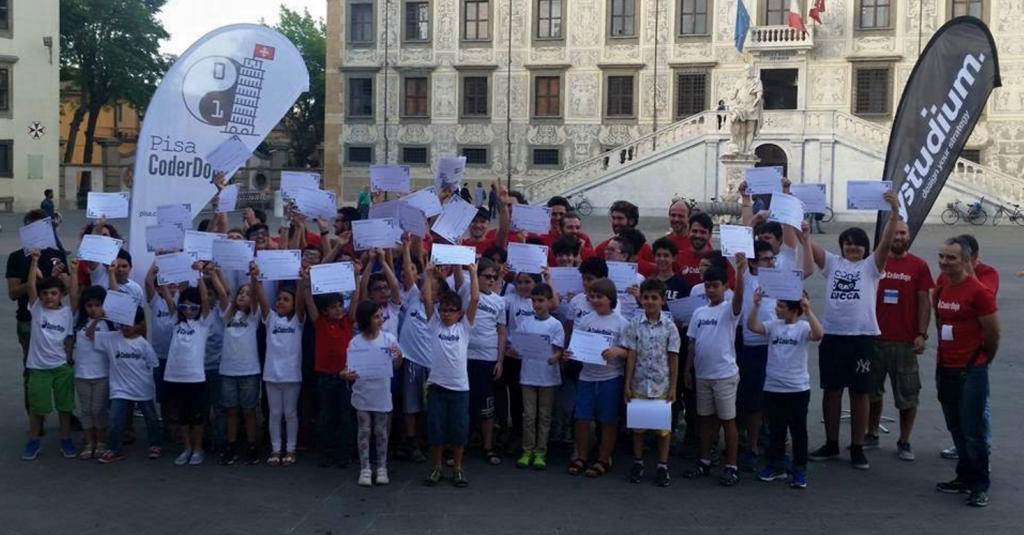 At the end of the day, all the involved ninjas were given the certificate of Code Ambassadors for Tuscany, having shown their super powers as programmers during the Dojo. And shouting “Be Cool! Sempre in gamba! Strabiliateci!” this unforgettable experience was over.

Watch the full stream of the event here.