The eir Junior Spiders Award winners were announced at a ceremony in Croke Park, Dublin on Monday, April 26th. CoderDojo, who support the event, held a pop-up Dojo engaging children in Scratch, HTML & Arduino projects prior to the awards ceremony itself.

The Awards, hosted by RTE’s Aidan Power, recognise and reward youths and young adults aged 4 to 19 for innovative website coding, development and design.

The event, which was established in 2009, and is now a favourite with CoderDojo clubs across the country. Many entrants go on to enter their web-creations in the CoderDojo Coolest Projects Awards in June.

There are three categories in the eir Junior Spider Awards. The Mega Spiders (aged 4 to 12 years). For older children, aged 13 to 15, there is The Giga Spiders and for students from 16 to 19, there is The Tera Spiders. Each age division is also presented with an overall Grand Prix winner, those who have excelled in their field. 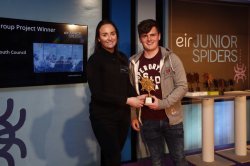 This year saw entries from over 25 counties across Ireland. The standard of entries was also the highest it has ever been with the majority of the winning sites being hand-coded. Award presenters included Bill Liao, Co-founder of CoderDojo and Mary Maloney, CoderDojo’s CEO.

Harry McCann, CoderDojo mentor since 2012 and founder of Digital Youth Council accepted the award for Best Group Website on behalf of DYC. 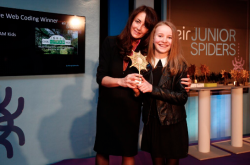 Lauren Boyle, an attendee and mentor at CoderDojo Bray, who has previously won a Coolest Projects Award was awarded both a Creative Coding & Grand Prix prize in the Mega Spider (Aged 4-12 years) category. She won the awards for her app & website Cool STEAM Kids.
Cool STEAM Kids encourage children (10-15 year olds) to try science, technology, engineering, art and maths (STEAM). It is available to download in the Google app store or by visiting www.coolsteamkids.com. This site was hand-coded using HTML, CSS and JavaScript. 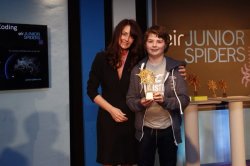 CoderDojo Athlone was also very successful winning the Creative Coding and the overall ‘Terra Grand Prix’ award, beating off competition against others in the 16-19 year old category.
This project, VT Networks, was developed for an IoT start-up. It was custom designed and built from scratch using HTML, CSS and JavaScript. Jeremy of CoderDojo Athlone who accepted the award has previously won a Coolest Projects award for his Punchbag IT App in 2015.

Feeling inspired after the event on Monday? The CoderDojo Coolest Projects Awards is currently accepting registrations for this years awards. If you are interested, click on the image below for more information:

Tweets from the Day: