CoderDojo was initially founded in Ireland, less than five years ago. From humble beginnings our community based programming clubs have spread worldwide, spanning sixty-five countries, from Bolivia to Japan. This St. Patrick’s day we decided to recognise the contributions of five tech entrepreneurs from Ireland whose innovations have spread internationally. We hope to continue to inspire and support young tech innovators globally through CoderDojo Coolest Projects and for the first year, Launch’d.  This incorporated event connects CoderDojo entrepreneurs with people already established in the tech industry.

So here they are, in no particular order: 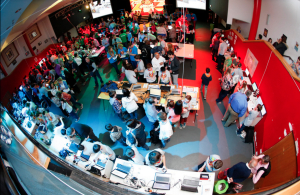 Given these five examples, it is clear that supporting young people to developing their programming ideas would be hugely beneficial for wider society.

Niamh Bushnell, the Start-up Commissioner for Dublin, will be speaking at this years Coolest Projects joint event, Launch’d. She has previously stated how she’s been amazed at the number and quality of start-ups in Ireland’s capital. Launch’d will serve as a platform for the participants of Coolest Projects to develop their projects into similarly high quality Tech start-ups.

Coolest Projects, with Launch’d aspires to validate Ireland as an international hub for developing inclusive technologies. This St. Patricks day, CoderDojo hopes all our supporters, mentors and ninjas feel empowered by the potential to be creators of technology, to grow a simple idea into a global movement!