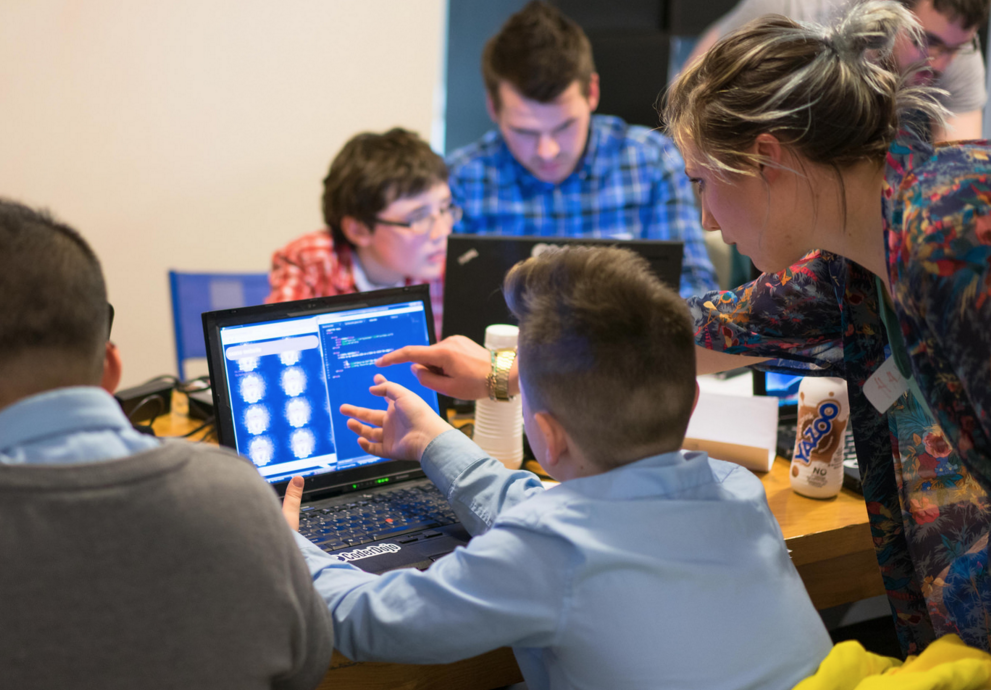 What is coding & How to get Kids & Young People Involved

Coding, what is it exactly; If you ask any of the kids involved in the CoderDojo movement, they’d very quickly answer without missing a beat: “It’s the stuff I type that makes my computer do cool things.”

The intricacies of programming and coding are just another part of their worlds – they are developing the skills that allow them to build great websites, apps and games, all on their own.

CoderDojo, an Irish founded charitable organisation and movement, now reaches more than 40,000 kids and young people in 850 free of charge volunteer led clubs in 62 countries around the world every month. At Dojos, with the support of 6,000 volunteers, the kids get introduced to coding, programming, hardware and software. This is achieved through creating fun, safe, club based environments where each child is encouraged to explore, create and innovate by developing their own technology based projects and products.

There are currently 185 CoderDojo clubs active in Ireland, reaching approximately 6,000 kids and young people on a weekly basis. But we need to reach more, all kids in Ireland should have the opportunity to build technology skills.

The skills demand for ICT talent is a global one. By 2015, it is estimated that there will be a shortage of up to 864,000 ICT professionals across the EU and the European Economic Area (EEA). According to the 2014 Report from Action Plan for ICT – Ireland is likely to face an average increase in demand for high-level ICT skills of around 5% a year out to 2018 with the employment of ICT professionals anticipated to rise to just over 91,000. The report indicates a continuing strong demand for high-level ICT skills with an additional 44,500 job openings forecast to arise over the period to 2018 from both expansion and replacement demand.

As traditional industries decline and fail, technology has become one of the fastest growing sectors of the economy and computer programming is increasingly recognised as a core competency for all workers of the future. Indeed even today, there are few jobs for which having a technology skill isn’t an advantage. Computer programmers enjoy high salaries, exciting challenges and opportunities to shape the world around them.

CoderDojo is about equipping kids with these technology skills that they’re going to need to be successful in life. It’s also about tapping into the natural fearlessness that kids have with technology, empowering them and enabling them as change makers and innovators.

Of course, not every child will want to write code for a living, but every child can benefit from having done it. More to the point, I believe every child regardless of gender or background, should have a chance to give it try. Coding hones math and language skills, builds problem solving, analytical thinking and logical reasoning abilities. It also fosters the most incredible innovation and creativity in our kids.

We all want to give our children the best possible support as they take on this new challenge, but how can we help them if we can’t distinguish our Boolean logic from our binary code?

For the majority of parents, coding will be as new to them as it is to their kids. Handled properly, this is a great opportunity for adults and kids to learn together.

So what is coding anyway?

Coding is nothing more than a set of words that tell a website, app, game or piece of software what to do. These instructions shape what is displayed and available to people using computers, devices, and even home appliances; instructing the computer to switch multiple things on or off at the same time, down to making even the smallest dot on a computer screen appear.. Code also forms the basis of the sophisticated tools and technologies that we use in the workplace and that are shaping and advancing all industries, from hospitality to advanced medicine. Just about everything we use on a daily basis runs on code: our favourite news or recipe websites, the smartphone apps we depend on every day, the devices we can’t live without. Code is the magic behind technology and by equipping kids with coding skills we’re giving them what they regard as superpowers!

What are coding “languages”?

All coding languages essentially allow us to convert lines of words and syntax that resemble everyday communication into binary code, the strings of one and zeroes that tell a computer what to do.

Each language has a name, some of which will be familiar: HTML, Java, C, Python, and, of course, child friendly “Scratch”. Developed by the Massachusetts Institute of Technology and available to download for free, Scratch is the first coding tool encountered by many kids. By programming their own Scratch interactive stories, games, and animations, kids learn basic computational thinking, including how to break a problem into bite-sized elements and solve it. Scratch resources can be found all over the web. If you have an iPad you can also download a version for children as young as 2 years old so they can play too.

Scratch is not only an excellent way for kids to learn the mechanics of games and computing, it’s also extremely easy for adults to understand. Remember, just because you are an adult, doesn’t mean it’s too late to learn coding. You may even love it. So why not learn the basics alongside your child?

With technology, it helps to have fun and to be interested! Ask your kids what they’re learning and what sorts of apps and games they are dreaming up. You may even dream up a few of your own.