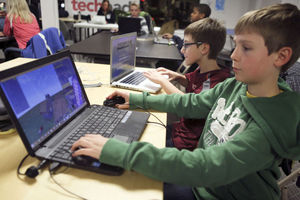 Youth prepare for the future at CoderDojo

BLACKSBURG — A young boy turns around in his chair, beaming at nearby adults about some video game objects moving on his laptop screen.

“I made birds with chickens and bats,” he said with excitement.

But the exercise was more than playing a game: Through some simple coding in Java, the animals shaped out of digital cubes were imported into the popular open world game Minecraft.

The coding exercise is among many in a weekly round of classes that local programmers at the shared workspace Techpad are voluntarily running for youth between 7 and 17 years old.

A mentor led coding program is returning to the Lied Scottsbluff Public Library.

Tomorrow at 3:45 p.m. the library will host the Coderdojo Program for youth to participate in open source coding presented by the nonprofit organization AIM.

“An example I give is some of the younger kids through this Frozen program through code.org, where basically they will code and teach others how to make Elsa move in a square or triangle,” says Yellman.

The Sun was shining and the weather warm on March 7, displaying the first signs of spring. Still, a handful of kids stay indoors, learning the rudiments of computer programing — one student works on animating a simple cat and ladybug, another, more advanced student programs a webpage capable of calculating the exact amount of time between any date and his birthday.

They are all members of the Iowa City Coder Dojo, a nonprofit group staffed by volunteers who take time to instruct interested kids ages 6 to 18. It meets from 2 to 3:30 p.m. every Saturday in the second floor computer lab of the Iowa City Public Library, 123 S. Linn St.

“There’s no barrier for kids from any kind of socioeconomic status,”Iowa City Coder Dojo cofounder David Welch said. “You don’t have to look or act a particular way; you just have to be interested.”

Does anyone remember the Book-It reading program from the ‘80s?

We would accumulate stickers over time for each book we read, eventually earning enough for a reward.

I can remember it perfectly — opening the slightly greased cardboard box, the distinct smell of Pizza Hut pizza, the personal size that meant it was mine and mine alone. I had been a reader my whole life, and now I was getting free pizza for it. What could be better.

Last year, Pizza Hut was offering free pizzas for Book-It alumni. I missed that chance, even though I read enough books for a few free personal pan. I didn’t mind though. Reading is its own reward.

While that reading program has since faded, the Scottsbluff Public Library has been working hard to keep kids interested in reading.