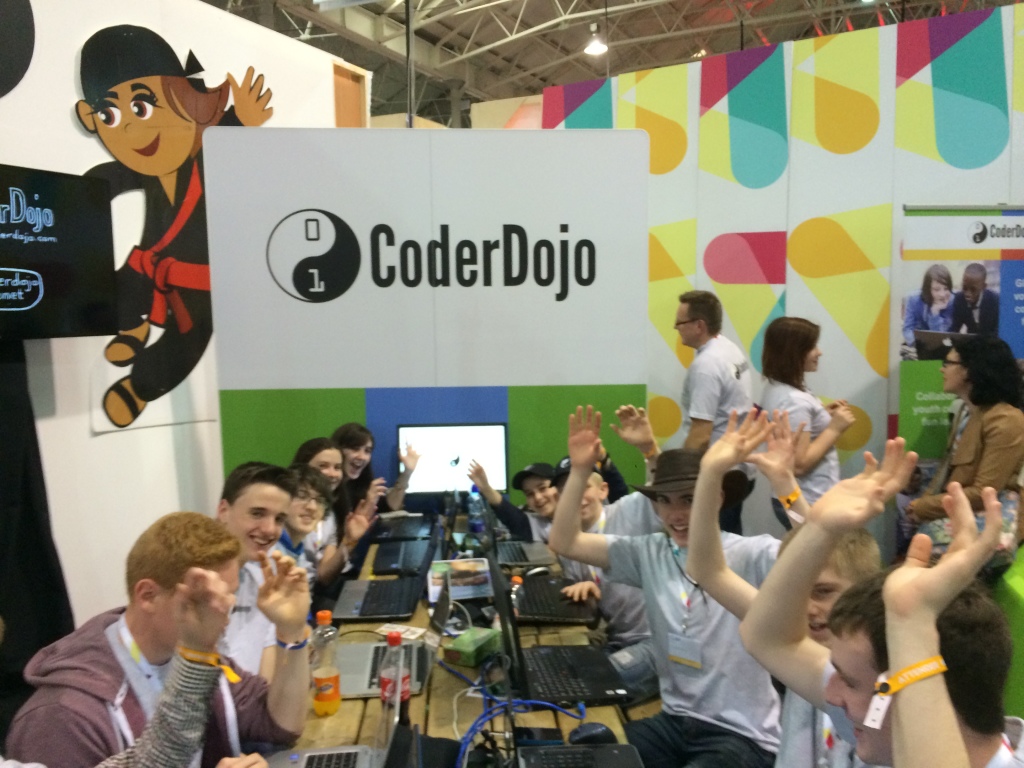 Ninjas at the CoderDojo Booth

Thanks to the generosity of the Web Summit CoderDojo had a booth in the Town Square this year giving the CoderDojo Community (young and old) an opportunity to experience the Web Summit main event first hand and to spread the good word about CoderDojo to the international attendees. Over the 3 days there were 40 CoderDojo Ninjas showcasing the cool projects that they made at their local Dojos from across Ireland and even the UK!

Watch an interview with the CoderDojo Ninjas at Web Summit!

Some of the Cool Projects!

Thomas from CoderDojo DCU brought along his Coolest Projects creation DojoBot! DojoBot has two infrared sensors that tell it if there is an obstacle in front of it and it navigates around it! Thomas used two arduino boards to create this awesome robot! 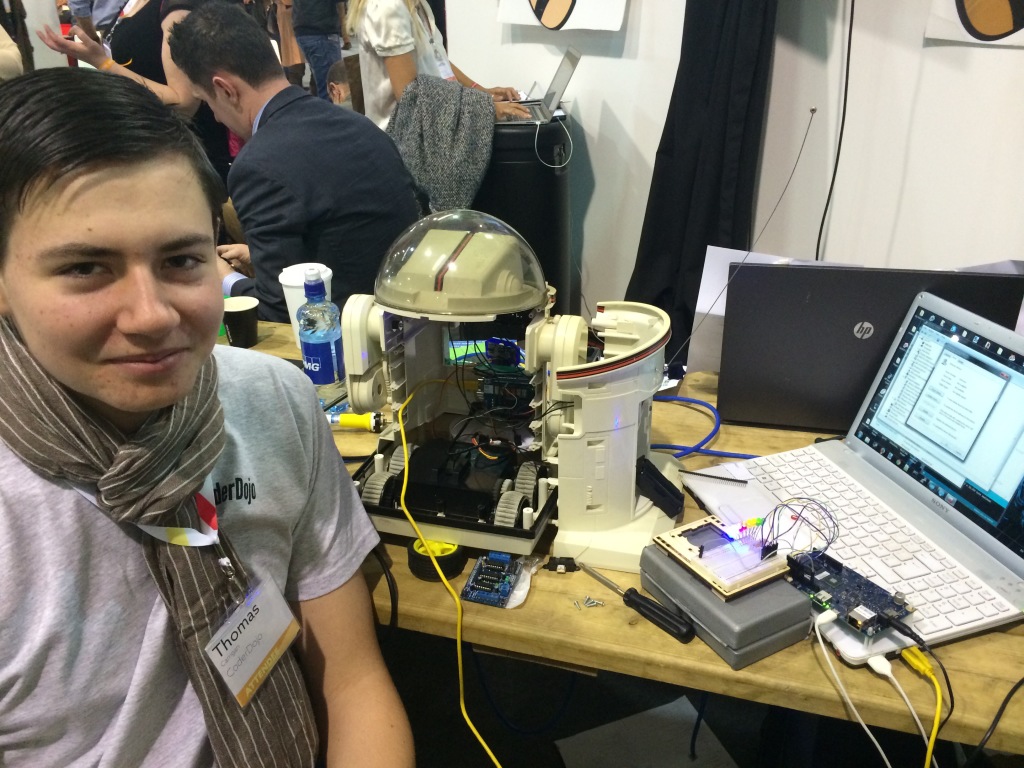 Thomas making some adjustments to DojoBot

Ciara started CoderDojo DCU because she was interested in seeing how coding works! Ciara created her own nail painting mobile Android app, you take an image of your nails and then you can change the colour of your nails at the touch of the screen, awesome!

Ciara showing us her Android app

Lauren (CoderDojo Bray) created her own website CoolKidsStudio which is a “website made for kids by a kid”. Lauren’s site consists of a lifestyle site a maker site and a healthy eating site! Niall (11) is the youngest app developer in Europe, releasing his first app at the age of 10! Niall is currently using swift to create his app which he’s been learning for the last month and will be releasing his website soon. 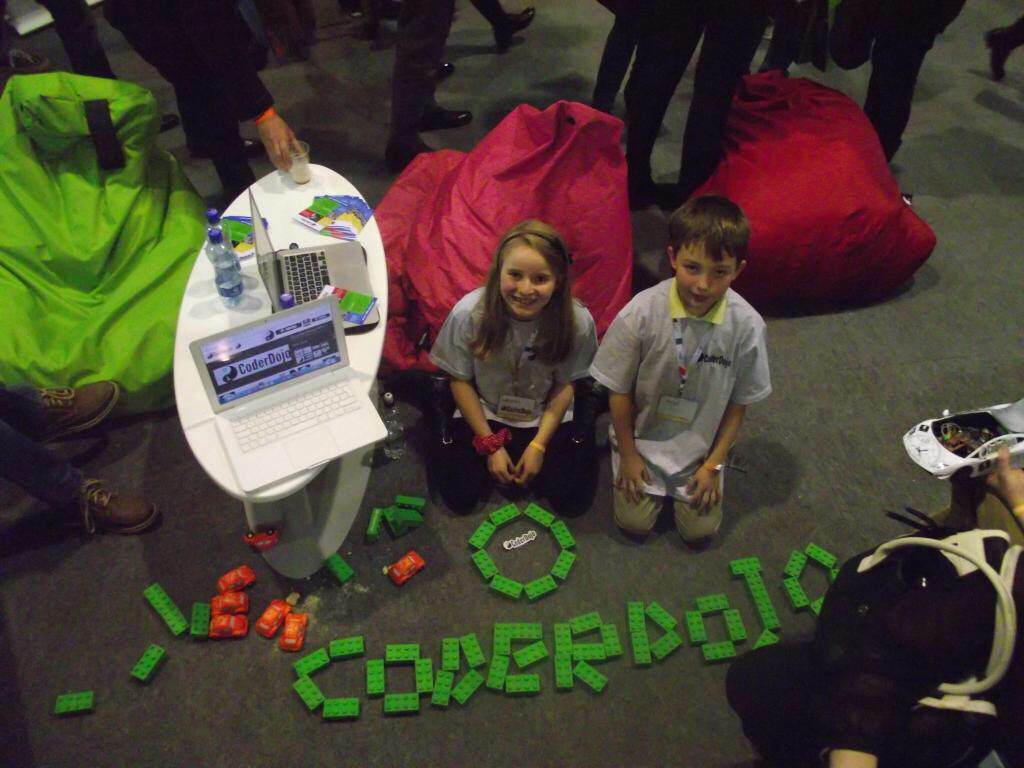 Sam, AKA the Ginger Ninja, traveled from Wilmslow Dojo in the UK and spoke about the game that he developed that teaches Dyslexic kids to learn the alphabet! Sam had one of the largest crowds as he was presenting his game at the People’s stage in the Machine Summit area! 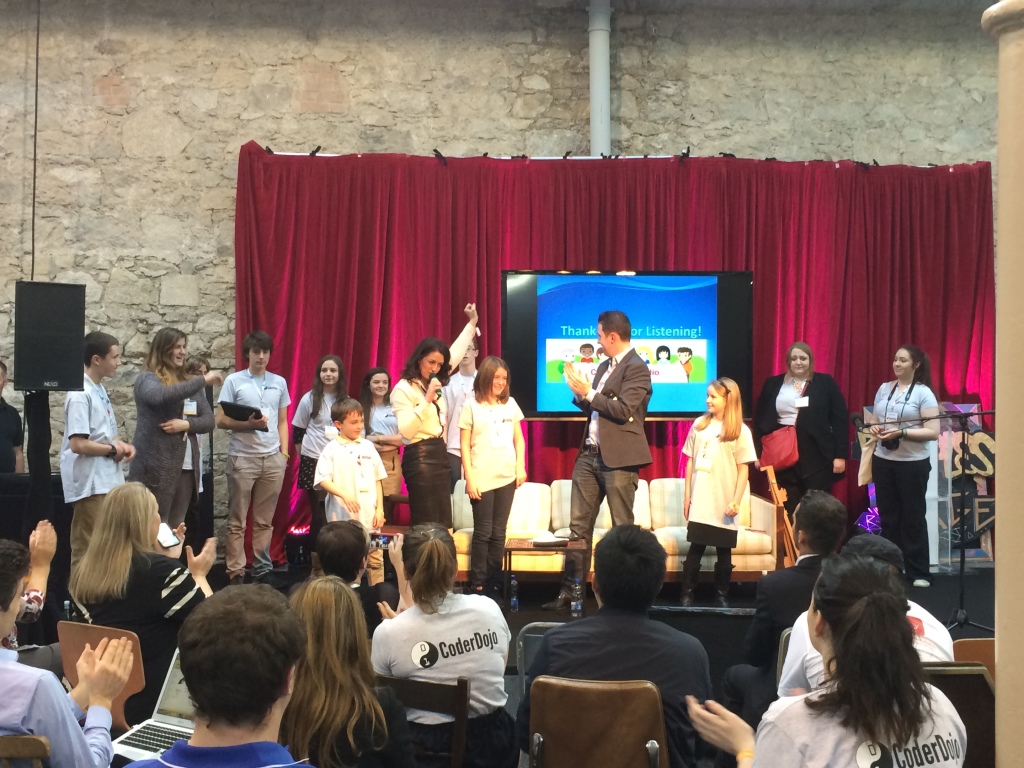 Lets here it for the CoderDojoNinjas!

On the evening of the 4th of November the Web Summit held the for Web Summit for Schools event! This event had 4000 students in attendance from Schools across Ireland, 1000 of these were CoderDojo community members! At the Schools event CoderDojo Ninjas, Niamh (DCU), Marc (Drogheda) and Lauren (Bray) chatted to Mary Moloney (Global CoderDojo CEO) about their love of coding and CoderDojo along side the likes of Anna Patterson (Google), Marcus Segal (Web Summit / Zynga) and Lauren Wirtzer-Seawood (Beyonce head of Marketing). The CoderDojo ninjas encouraged all kids to start coding because it was so much fun and allowed you to make super cool things! 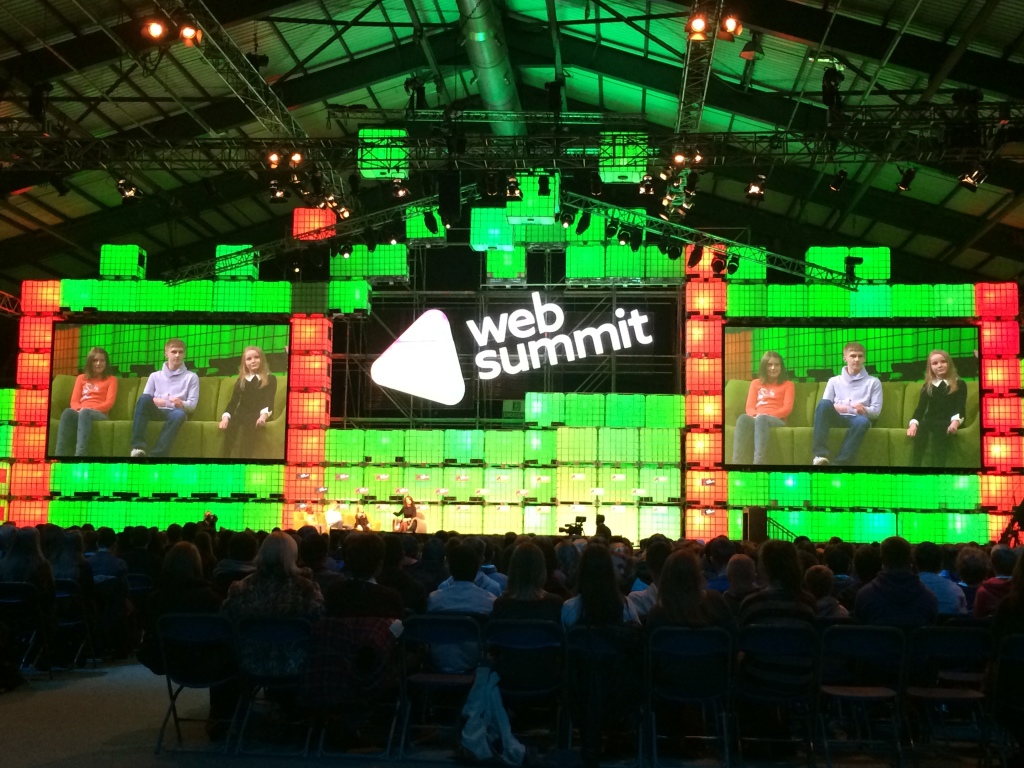 Niamh, Marc and Lauren talking to Mary Moloney on the main stage at Web Summit for Schools

James Whelton, CoderDojo co-founder, interviewed child prodigy Adora Svitak. Adora, published her first book at age 7 and delivered her first TED talk aged 12 on what adults can learn from kids which has 3.5 million views! They discussed tech, education and Adora revealed that she is a secret Taylor Swift fan, James responded revealing that he was a Miley Cyrus fan! 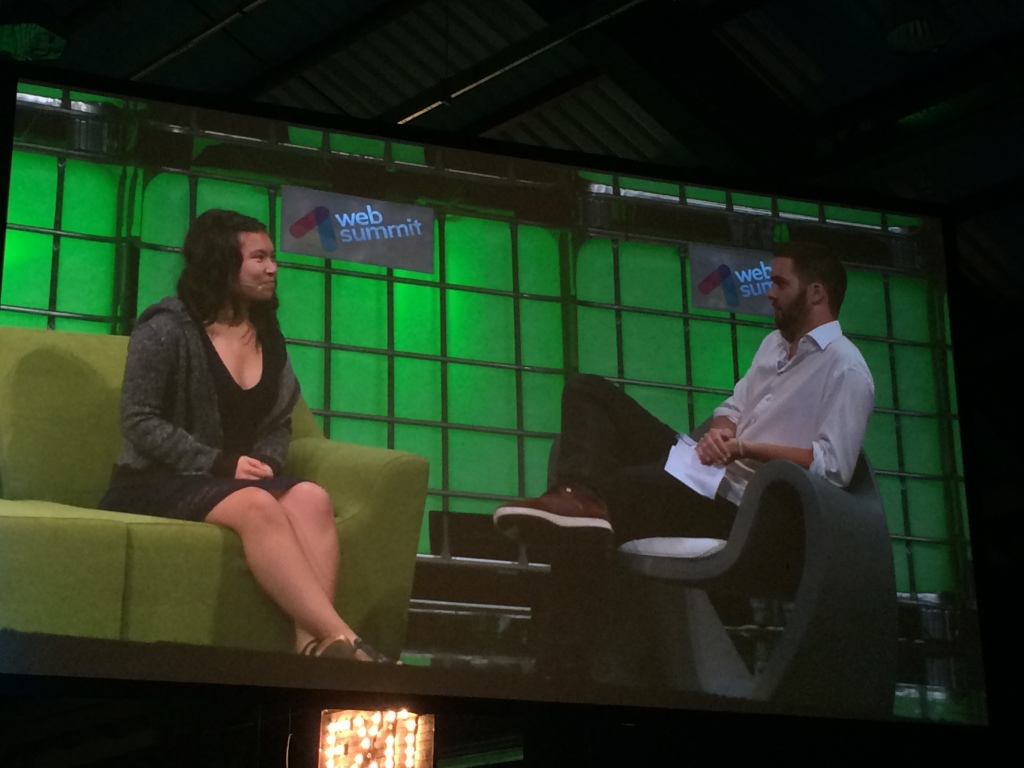 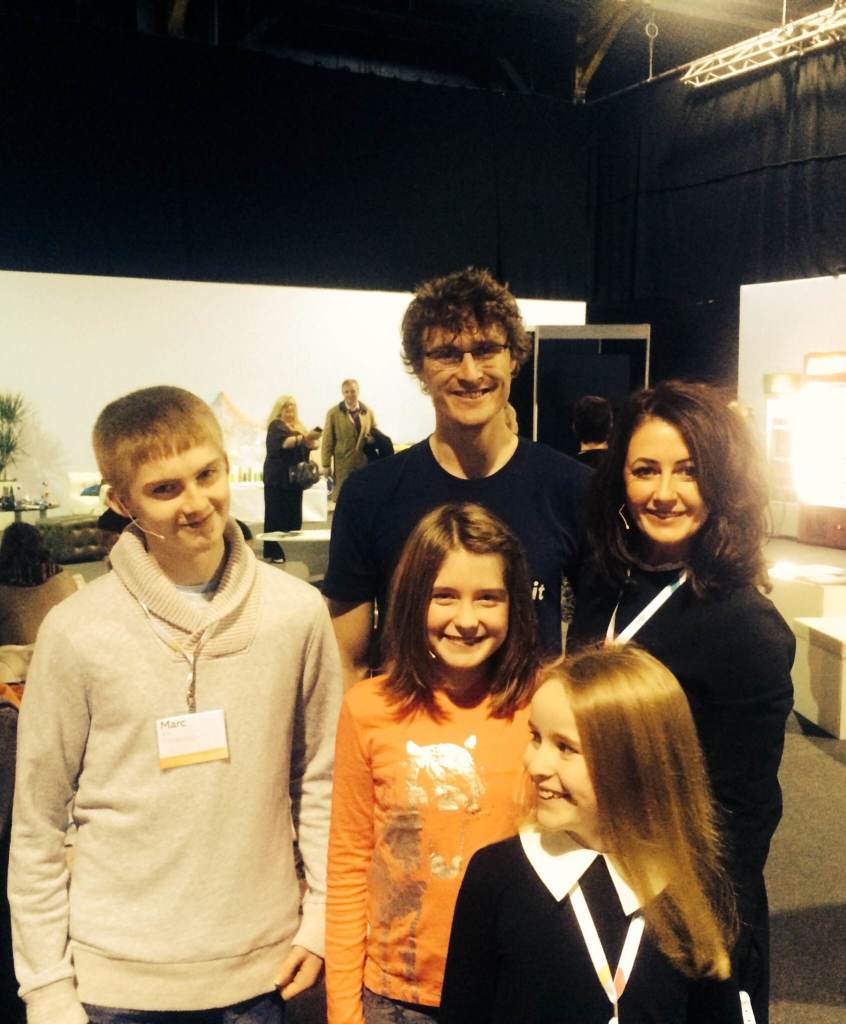 More images from the Web Summit!

Well done to all the CoderDojo Ninjas that took part in the Web Summit this year. You are an inspiration to us all and should be proud of your awesome achievements!

Tweets from the event