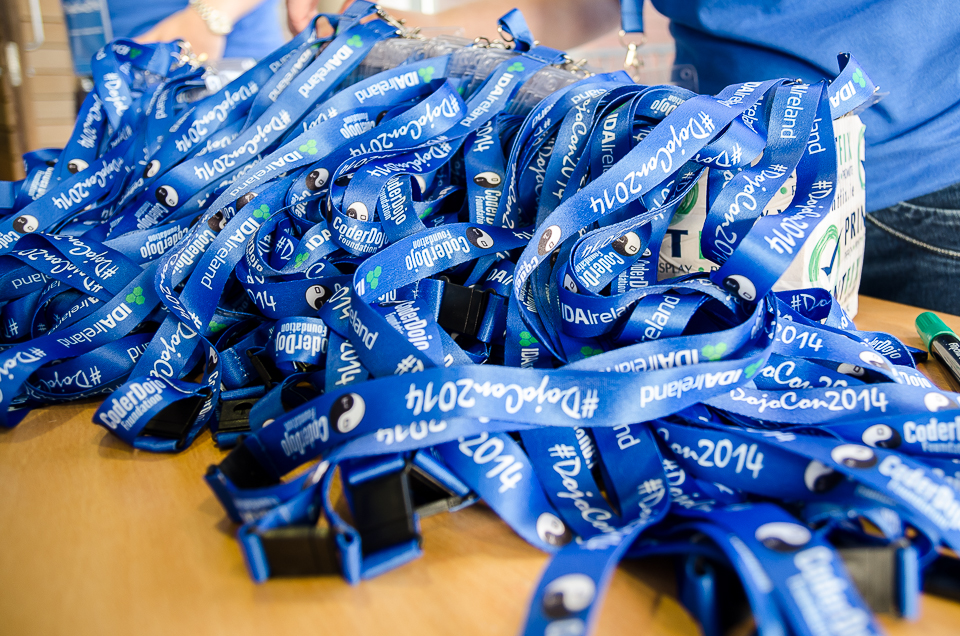 CoderDojo Sligo proudly hosted the CoderDojo global conference in Sligo, Ireland on October 3rd and 4th.  We launched on the Friday with some insightful, humorous and thought provoking ignite talks in the beautiful surroundings of Canis Major on the Friday night with a nod to Yeats Country and a projection of W.B. Yeats in binary!  The evenings entertainment was provided by local group the “Out of Towners” while Mentors, Champions, the Foundation team and more, finally put faces to the names!

Moving on to the Knocknarea Arena for Saturday, delegates were regaled with tales of massive growth – with over 500 dojos now established all over the globe.  Indeed delegates from Belgium, England, Brazil, Scotland and the Netherlands were in attendance – sharing their own stories of establishing CoderDojos in their own communities.

New global CoderDojo CEO, Mary Maloney received a warm welcome from the community and from CoderDojo co-founder, Bill Liao.  Mary spoke of a global focus and the huge potential for further growth and global collaboration. 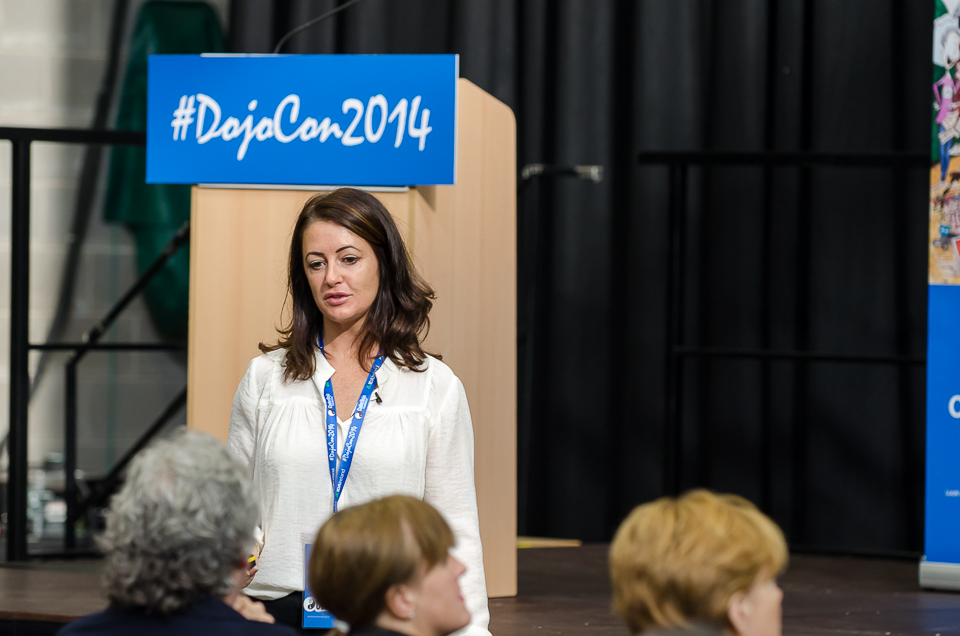 Collaboration with the tech industry, with educators and with communities were the 3 big themes of the event and each threw up some very dynamic stories of collaboration. Debbie Forster, Apps for Good, really set the tone for this theme of collaboration in a very engaging opening keynote. 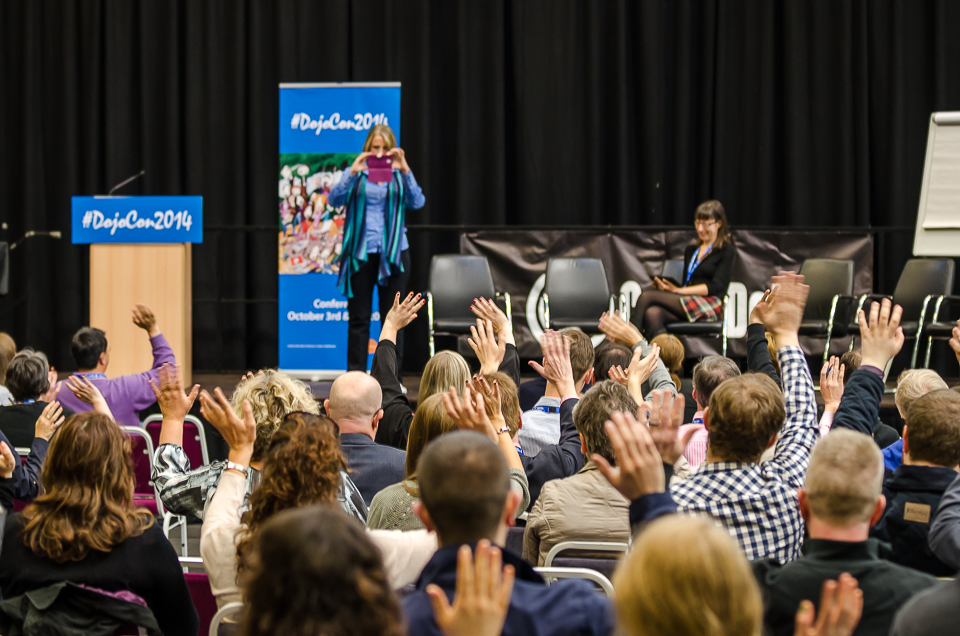 Debbie Foster takes a snap of the crowd!

In the Tech stream, Microsoft, IBM and closing keynote Dave Shepherd of Barclays all made announcements in relation to new platforms and facilities they are making available for CoderDojos and the thousands of children who participate now and into the future. These will give access to learning platforms, remote mentoring facilities and new bricks-and-mortar venues for dojos across the globe. 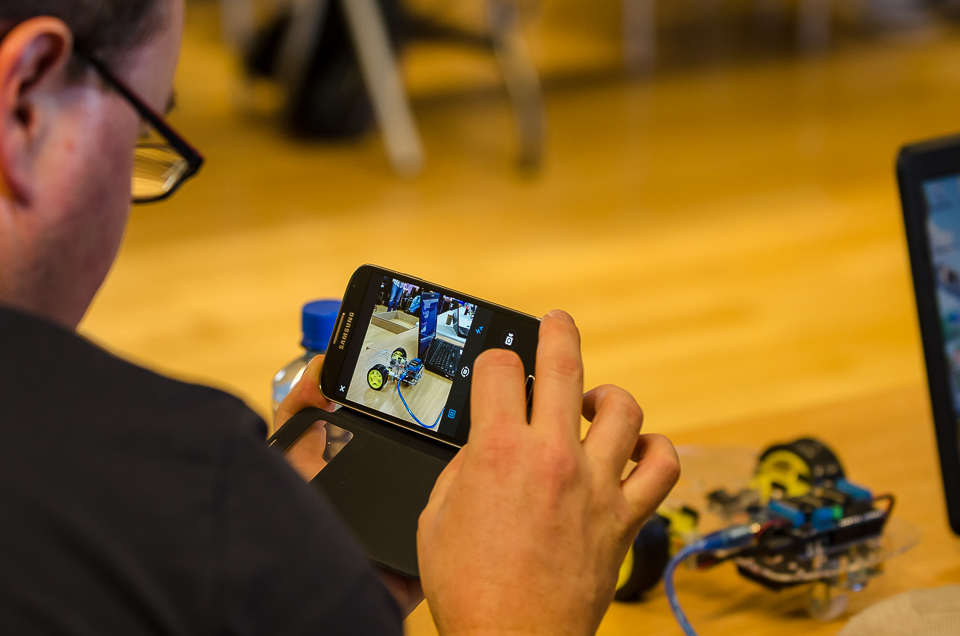 The Community stream featured a number of high profile UK ‘coding in the community’ organisations like Apps for Good and Young Rewired State and plans are underway for some more formal collaboration in the coming year. The challenge of gender equality was high on the agenda while the gender balance was tipped in favour of the ladies, with Bill Liao at one point noting it was the first tech conference where he was outnumbered gender-wise on the panel.  John Helfen was on hand from AutoDesk to announce their support for CoderDojo and the opportunity to bring 3D to your dojo. 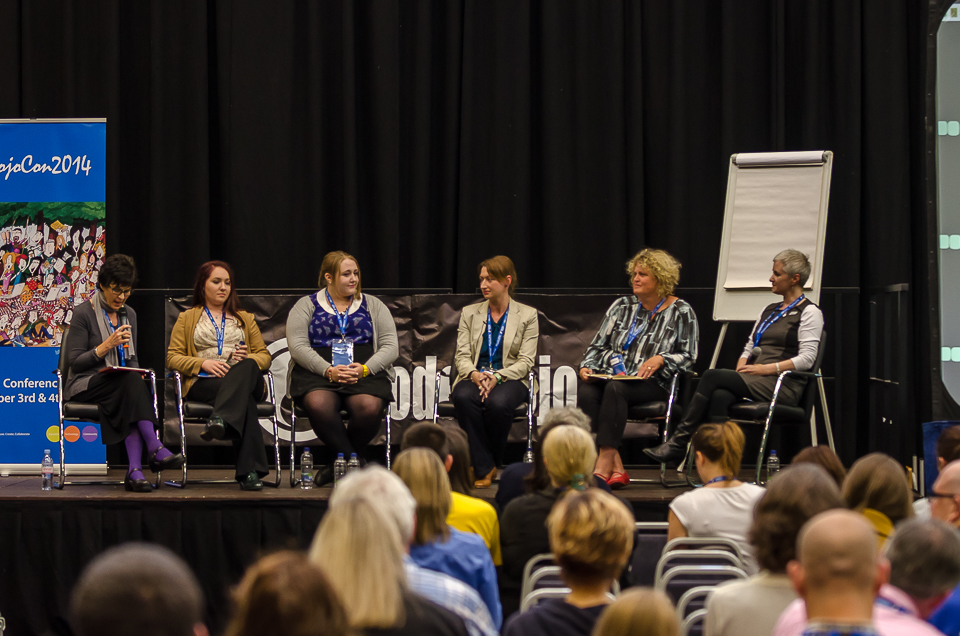 In the Education stream, there was an invitation to dojos to participate in the European Week of Code from Irish EU Code Week Ambassador, Julie Cullen. Aoibhinn Ní Shúilleabháin of UCD and RTE’s ‘Science Squad’ shared some very interesting research on learning about algorithms and numbers.  The challenge to schools around integrating technology in the curriculum – as they’ve done in the UK was a hot topic. 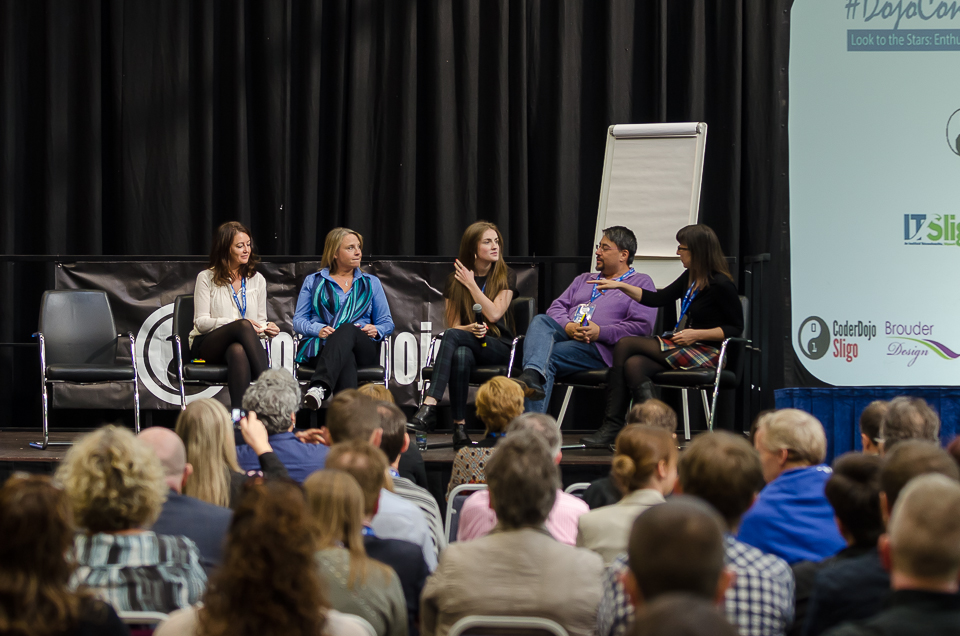 The days proceedings drew to a close with a surprise appearance by Sligo Gospel Choir in the arena with The Script’s “Hall of Fame”… Be a Champion! 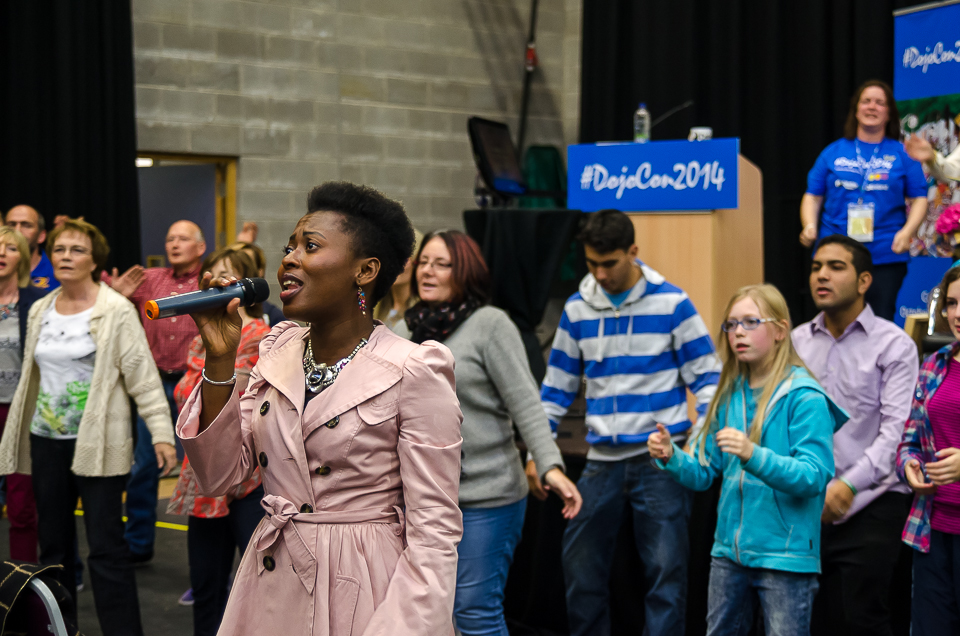 We wrapped on Saturday night with an After Party in 5th on Teeling where 80+ animated Mentors were close to considering a fine for every time folks used the phrase “We should “!  Big thanks to Colin et al for arranging everything on the night.

The theme for DojoCon 2014 was “Look to the Stars: Enthuse, Create, Collaborate” and aimed to encourage new mentors and collaboration & exchange of ideas.  We’re all fired up here in Sligo, full to the brim of new ideas and hope that DojoCon has had the same effect on you! 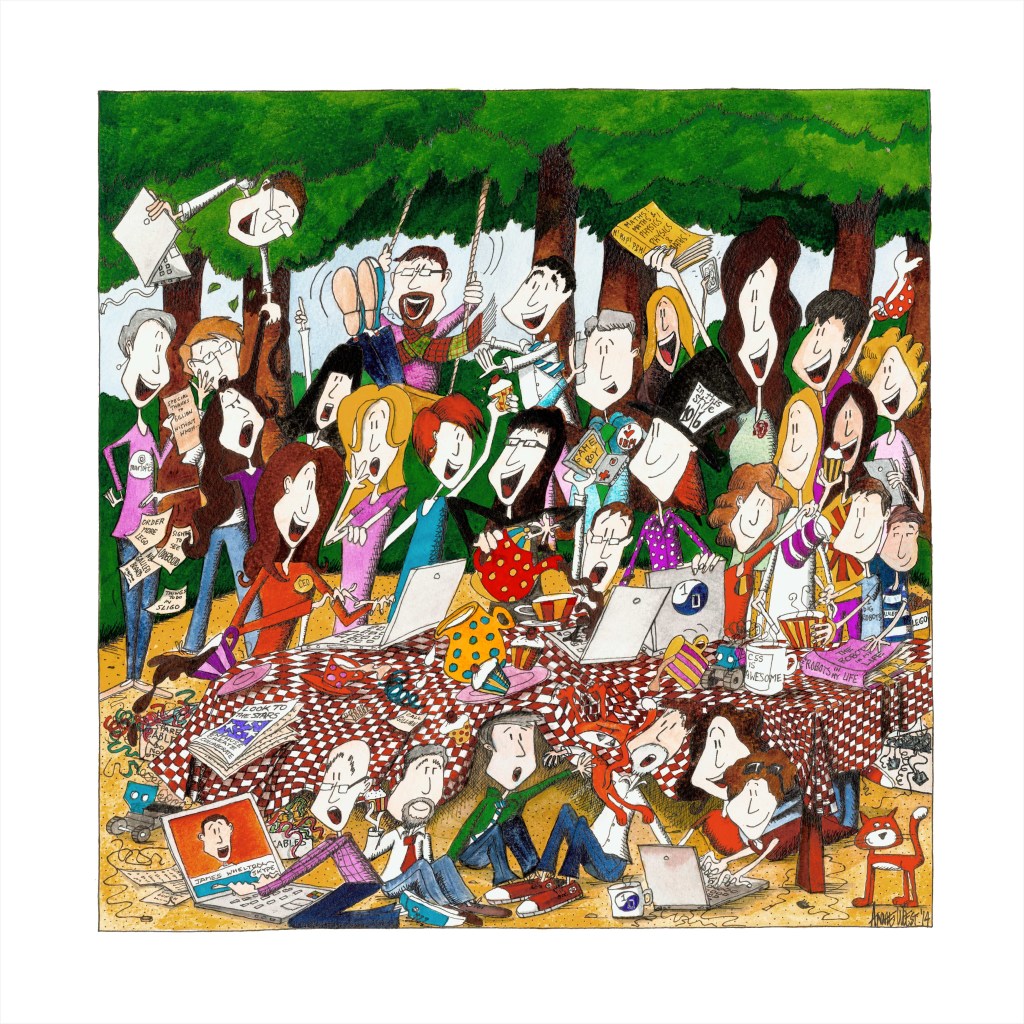 Pic by Annie West of all the speakers

There are so many folks that we would like to thank. Our sponsors and supporters without whom we would not have been in a position to host are: 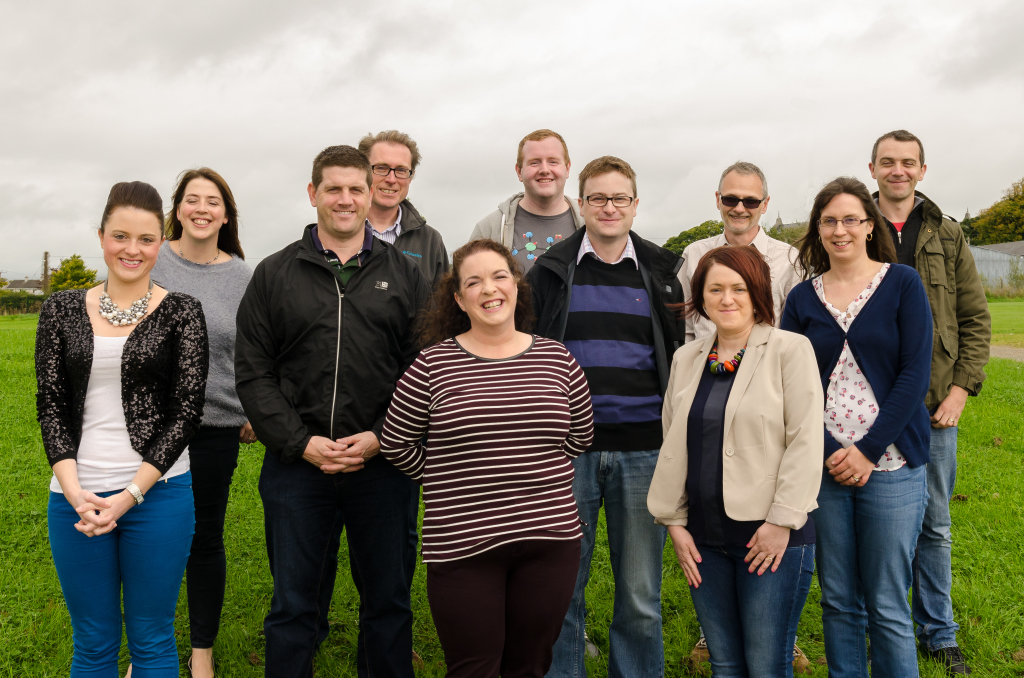 Thanks to the CoderDojo Sligo community!!

The DojoCon team would like to thank in particular the extended CoderDojo community in Sligo.  Friends, family, ninjas and parents that wore those blue shirts and looked after everyone so well.  DojoCon would not have been the same without their assistance and our community is stronger for their help and support. Thanks so much!!

Following from the hugely successful DojoCon 2014, CoderDojo Sligo were delighted to be in a position to make donations to two local charities on behalf of DojoCon2014! 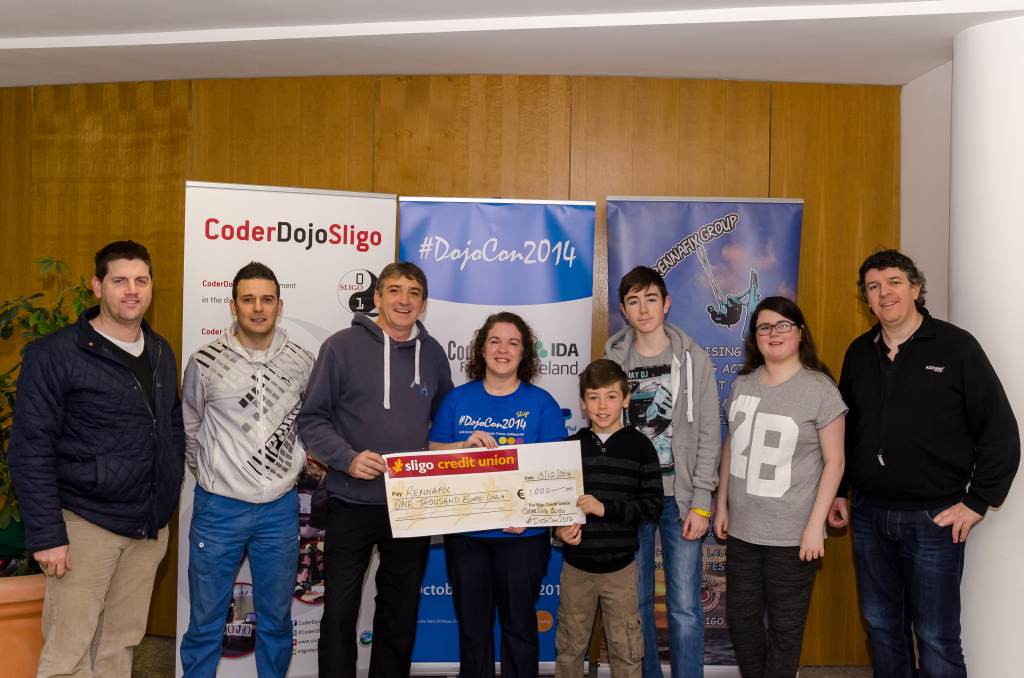 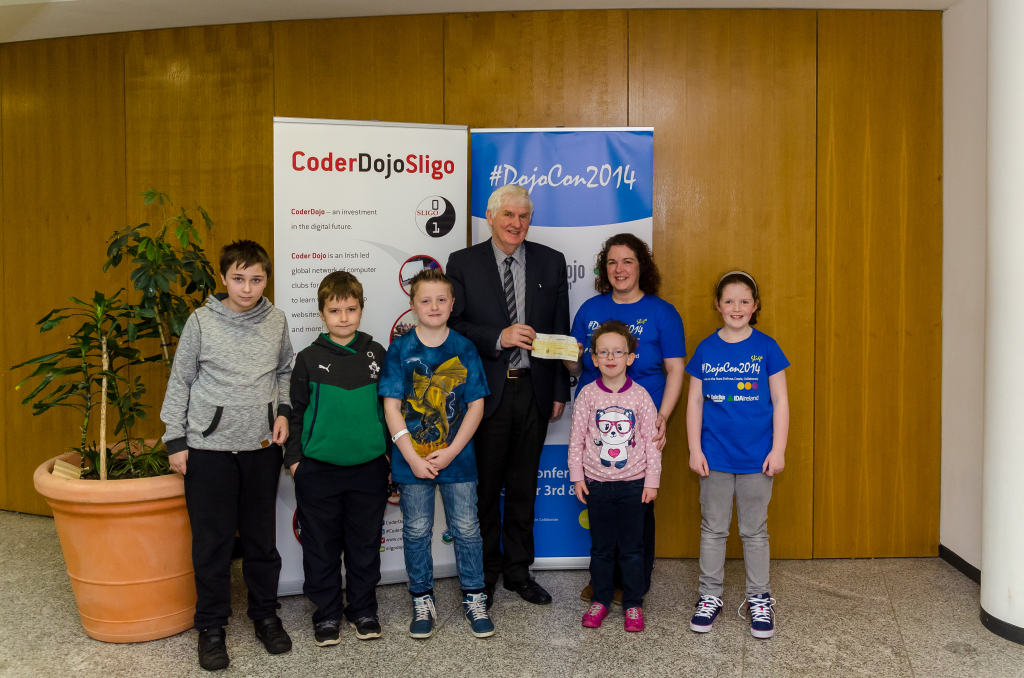 The ENTIRE proceeds from the conference ticket sales were donated to charity with €1000 presented to the North West Hospice and a further €1000 presented to Rennafix.
This was made possible by the generous sponsorship received from IDA Ireland, The CoderDojo Foundation, Lionbridge, PayPal, IT Sligo and Sligo Leader which funded the event and the many, many supporters and volunteers giving their time and services for free!