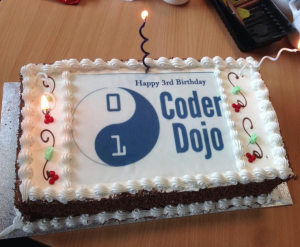 CoderDojo has come a long way from the initial Dojo held by James and Bill at the National Software Centre, Cork in 2011 where the original “rules” sheet still hangs in the Dojo today! Since the first Dojo here the CoderDojo movement has grown from strength to strength and as of July there are over 458 Dojos spread across 47 countries, such as Nigeria, Japan, Italy, Romania, Hawaii, the US and more! All these Dojos have one thing in common and thats engouraging young people between 7 and 17 years old to learn how to code by developing their websites, apps, programs, HTML games and exploring technology. All this would not be possible with out all the Volunteers, Mentors and coding Ninjas that attend and inspire young coders every week at their local CoderDojos. Happy Birthday and a big thank you to you, the CoderDojo Community! 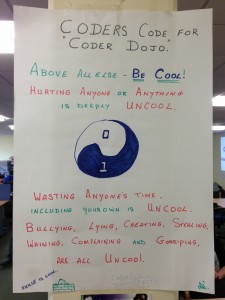 A message from CoderDojo Co-founder Bill Liao:
“Recently the world has been waking up to the urgent need to get more kids into computer programming. The fantasies of the late 90’s and early 00’s that we would not need more computer programmers failed to anticipate the rapid expansion of computers into every field of human endeavor. CoderDojo in its three years has seen a number of other movements start up to try to also address the crucial problem of a global lack of programmers and we applaud anyone who is tackling this global problem as long as they do so in the spirit of cooperation. There have to be places for kids to get good at what they love to do. For football its obvious where you go, for music its also obvious, for Computer programming, wherever there is a CoderDojo, its also obvious where you go. We need to spread Coderdojo so all kids have the opportunity to get good at the Coding they love.” 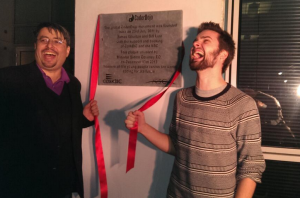 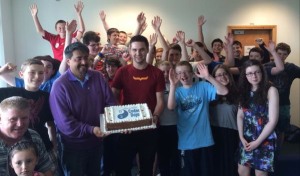 Listen to the podcast from NSC Cork Dojo on the 3rd birthday of CoderDojo!
Share this post