On the 3rd of October last year Intel announced their new Irish designed product called Galileo. The team at Intel product joined forces with Arduino to create the first Intel-Based Arduino-Compatible Development Board. On release of this board twitter went nuts with developers out there looking to get their hands on this new maker device. At CoderDojo there was also great excitement and curiosity about the potential of this board, while we also wondered could we get our hands on the Galileo Boards. So why such curiosity in CoderDojo? All of us involved in the movement have looked to push the education and creative boundaries through exciting and engaging CoderDojo sessions. To date dojos have pushed the hardware software boundaries integrating Arduinos and Raspberry Pi’s into their dojo session. Galileo now offered a new creative opportunity mixing both Arduino functionality and general purpose input/out (GPIO) through Linux, thus providing members with the opportunity to program these devices using Processing, Python, Node.js, Ruby and even shell scripting. 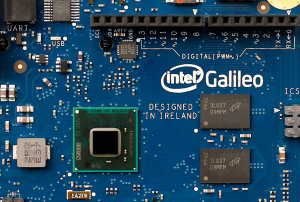 Intel has worked closely with CoderDojo since the early days and we were delighted when they invited us to discuss a CoderDojo Pilot to create cool on the Galileo boards. We went to the meeting with such excitement and anticipation to not only see the Galileo boards but also see an opportunity for CoderDojo members to play, hack and create with these boards. We agreed to run a pilot with 5 dojos from all over Ireland.

These dojos were picked due to geographic distribution and their initial interest in using the Galileo boards. Each of these dojos will receive 5 Galileo boards and starter kits in the coming weeks. Members will present the outcome of this pilot at this year’s Coolest Projects Awards. We can’t wait to see what they create. Already there have been some exciting projects suggested including a HTML5 Fitness game powered by the Galileo, a Galileo controlled car and even a new Galileo course being created by CoderDojo DCU to teach Galileo development. Don’t worry CoderDojo DCU will opensource the course on github.com. We have created a community in CoderDojo around the Galileo boards and if you are interested in keeping up to date or helping out

We have also setup an email address [email protected] for any questions on the Galileo program or feedback. We look forward to seeing the creative and cool output from this pilot at the Coolest Projects Awards, so hope to see you there.