Fredericksburg, Virginia and Long Island, NY sent a contingency of young coders and their very supportive families to Orlando, Florida for the 2013 Minecon event where 7500 ravenous fans of the popular sandbox construction game Minecraft were gathering to celebrate. Tickets to this event sold out in record time, with first day allotment moving in just 3 seconds, and overall demand measured at over 100,000 people! That is incredible for a game and company that just officially celebrated its 3 year anniversary. So you can imagine the excitement of the kids from our dojos that were lucky enough to be attending. Turned out that was just the beginning! 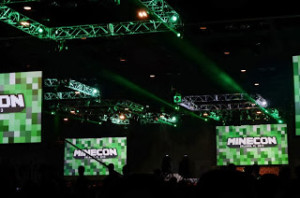 One week before departure, dojo mentor Devon Loffreto was informed that he would be leading a panel at Minecon on the subject of “Kids Learning Code” using Minecraft as their motivation. A subject very much at the heart of the dojo experience. As a result of this, a couple of very excited kids were given the opportunity to join the panel, to wear their special “panelist badges” around the conference, and put on a demonstration of skills they have earned by participating in dojo educational events. 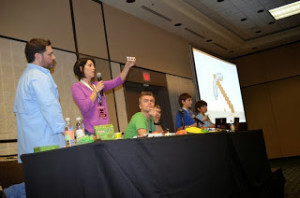 Using a MaKey Makey board (arduino leonardo), Zhen (8) and Andrew (10) led a demonstration and built an interactive game controller using one of the foam diamond pick axes being sold in large numbers at the event, as well as a more hand-made version built from wooden sticks. They did the work in front of a room of 400+ attendees, using jumper wires and alligator clips and re-configured the game controls in Minecraft so that when they used their diamond axe in the real world, it affected game play within Minecraft. 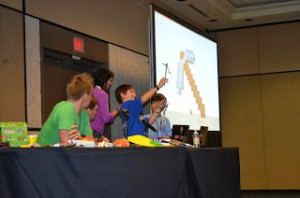 The demonstration was a huge hit with the kids in the room, and both of the students received applause and laughter with their creations and demonstration. Surprisingly, very few people were aware of the MaKey MaKey in the room (<1%), so there was a huge novelty factor. Everyone on the panel and in the room made the same point… “I wish this stuff existed when I was a kid!!!”. Don’t we all? 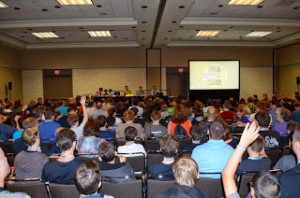 As the students continued with their demonstration, the floor was opened to questions. One of the questions was “How do you get mentor participation in your educational events?” Having lost the attention of the kids in the room, Devon spoke about CoderDojo, the open and free collaboration that he is involved with as the means by which he has approached solving this challenge. Speaking candidly, he said, “This is the hardest part, but so important, and so valuable. It takes leadership and consistent effort. As a parent, I have had to force this topic into the schools. The intimidation factor in schools is high when it comes to technology, but it does not have to be that way, and it is resolved with community engagement. I was fortunate enough to find support from some excellent mentors from Red Hat and other technology-related organizations, and that has helped solve this issue. But it is always an issue, and parents are vital to making it work.” 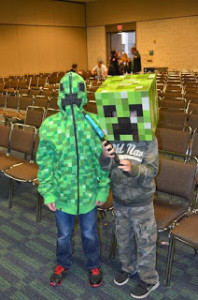 It was a very exciting experience, and it culminated in new attendees at our dojo in Fredericksburg on November 9th from other residents who were attending Minecon and learned about our dojo in this panel. The smiles on our students faces were pinned there for quite awhile, and their pride in their learning path and the dojos that they are a part of was permanently affected for the positive. As we come home, that is what we will be sharing, and inspiring other kids with as they seek their own skills through our CoderDojos.

This is a contributed blog post by Devon Leffreto of CoderDojo Long Island (@CoderDojoLI).