The Seattle CoderDojo (@SEACoderDojo) launched on September 7th, 2013. We met in the back of the Microsoft Store in the University Village shopping center near the University of Washington. They and the Bellevue store are hosting us on a mostly round-robin basis through late November. 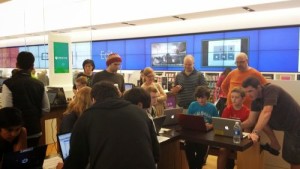 We had 19 children in attendance with zero no-shows, most were in the 8-12 range with a couple being younger, and one older one was working on a project in Lua (which we had no one to help with).

We’re heading into week three, learning along the way. Thanks to all our fellow organizers for all the advice, help , and good wishes.