Edit: We now have an official date… August 27th. Hopefully we’ll see you there!

Now that we’ve been running the Cork Coder Dojo for a few weeks we think we’re about ready to unleash the project on Dublin. We’ve managed to get an amazing space in Google’s Montevetro building. I’m sure everyone who comes to the Dojo will agree with us on that. Serious thanks must go to John Looney from Google who kindly offered this space.

We know that some people have been awaiting the Dublin Coder Dojo to open, so much so that they have been willing to drive to Cork from Dublin just to attend the Cork Dojo, so we’re happy to announce that we will open our doors on August 27th! We’re hoping the Dojo will attract a great amount of interest from kids, teens and their parents in Dublin and surrounding counties. 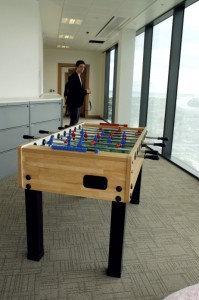 A table football table in our space of Google's Montevetro building

Whilst we have had great success in securing space for Dojos we still need your help! We are still looking for donations of anything we can hack and laptops for those Dojo attendees who can’t get access to one. We also need about 50 USB keys (1GB or above) so that we can have Ubuntu ready-to-go on USB keys rather than having to spend time installing Ubuntu and all the software on laptops.